Dell acquired Wyse last year and launched a line of cloud computing products that lets you access software data on a remote server. Most of the products in this line look like tiny computers which you can connect to a keyboard, mouse and display.

Now the company is introducing a new thin client that you can put in your pocket, and it’s aimed at the consumer market rather than enterprise. 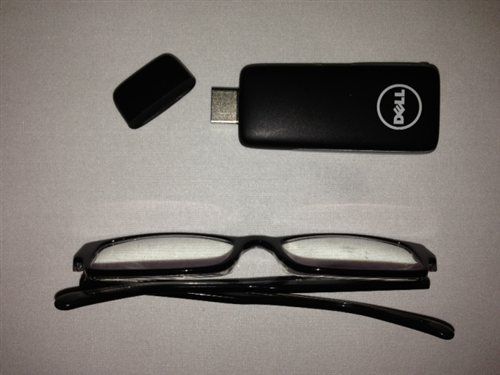 Dell’s “Project Ophelia” looks like a kind of big USB flash drive. But if you plug it into a TV or monitor it lets you access your music, movies, pictures, and other data stored in your “personal cloud” using Dell Wyse Cloud Client software.

You can also play games, access documents, and perform other PC-like tasks on a TV with a Project Ophelia stick plugged in.

For the most part these apps aren’t actually running on the Project Ophelia — instead you can login to a remote PC or virtualized PC environment. Dell says the software supports Cirtix, VMware, and Microsoft back-end systems.

The stick features WiFi and Bluetooth and it can draw power directly from your display — if your display has an MHL port. If not, you can connect it to an HDMI port and plug in a USB power cable.

While Dell is emphasizing Project Ophelia’s cloud client capabilities, under the hood this thing is running Google Android 4.0 which means you can also use it to surf the web, check your email, play media or run other Android apps without logging into a virtual desktop at all.

In other words, Dell is getting into the Android TV stick business, but unlike the companies selling cheap white box Chinese TV sticks, Dell is positioning its device as a thin client.