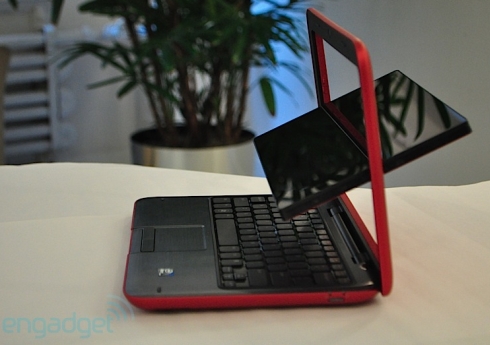 Dell tells me it will likely be at least a few more weeks before they can send me a demo unit of the new Inspiron Duo convertible tablet-style netbook to review, but Engadget’s Joanna Stern just published a detailed review of a pre-production model. Like the folks at Laptop Magazine, she found the hardware to be decent, but the overall performance of the software Dell designed for the tablet mode was almost too sluggish to be usable.

Stern also found the viewing angles on the display to be poor — which is more problematic for a tablet than it would be for a typical netbook, since there’s a decent chance you’ll hold a device like the Duo at an angle which could lead to washed out colors and poor visibility.

While the tablet seems to have a sturdy build quality, decent touch panel, keyboard, and touchpad, there are some strange design decisions. For instance, the camera is on the bezel above the display — which means you can’t use it in tablet mode, because it’s smooshed up against the keyboard in that mode. Dell also didn’t include any video output, SD card slot, or Ethernet jack on the computer. You have to spend $100 on an optional docking station with built-in speakers if you want a VGA port or additional USB ports. Update: Nope, there’s no VGA port on the docking station.

That said, I still like the concept of the Duo. Most convertible tablets require you to essentially use Windows 7 with your fingertips — something which can be tricky to do without sufficiently powerful hardware. Dell instead designed a suite of media applications for watching movies, viewing photos, listening to music, and performing other tasks. When you flip the screen to use the Duo as a tablet, this software automatically comes up (although you can disable it).

Unfortunately it takes around 20 second to launch the individual apps (photos, videos, music, and so on), and they seem very unresponsive once loaded.

Hopefully software updates can address these issues. But what I would love to see is a device like the Duo which runs Windows 7 in laptop mode, and can switch to Android or another light-weight mobile OS in tablet mode. That way you’d be able to use finger-friendly apps with your fingers, and keyboard-and-mouse friendly apps in clamshell mode. Or imagine a MacBook Air that could transform into an iPad and run iOS apps.