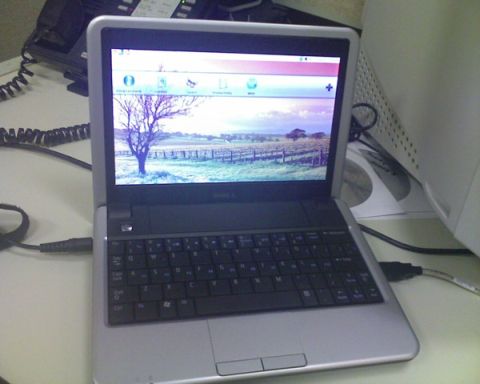 For some reason companies seem to love throwing really larger shortcuts for commonly used programs onto tiny laptops these days. Asus pioneered the “easy mode” interface for the Eee PC. But others have followed suit with easy to use program launchers for Linpus Linux Lite (the OS used on the Acer Aspire One) and Ubuntu Netbook Remix (the flavor of Linux that will be used for the Gigabyte M912 and other computers). I don’t know if the theory is that the screen is so small that the icons should be big enough to see from space, or that Linux is so alien for many users that it should be as easy as possible to launch programs without pulling down the equivalent of a start menu.

Either way, Dell is getting into the fray by adding what appears to be a custom program launcher to its upcoming Inspiron 910 mini-laptop running Ubuntu 8.04. This is not the same thing as Ubuntu Netbook Remix, the add-on for Ubuntu developed by Canonical. Rather, it’s been described to me by an anonymous source as a customizable dock-style program launcher with shortcuts to preloaded applications and useful web sites.

Sascha at Eee PC News.de has a bit more information on the program launcher, but a picture is worth at least a few words, and someone sent Engadget a few photos of an Inspiron 910 running Ubuntu. You can see one which clearly shows the dock above, but there are a few more snapshots at Engadget.

Note that the reason the PC lists two CPUs is not because it features a dual core Atom chip. Rather, the Intel Atom N270 supports hyperthreading.