Dell is launching a new affordable portable notebook which it says will offer more than 8 hours of battery life and which will sell for $379 and up. But the Dell Inspiron 11 3000 series isn’t an Intel Atom-powered netbook. It’s a notebook with an 11.6 inch display and an Intel Haswell processor.

The Dell Inspiron 11 3000 Series notebook is set to hit the streets in early October.

Dell’s also expected to offer a model with an AMD processor for $349 and up.

Update: You can find more details in our hands-on. 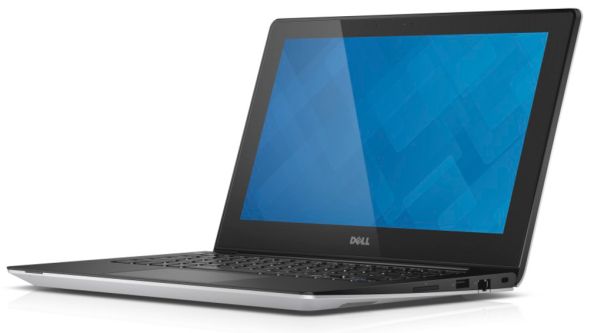 The notebook measures 0.83 inches thick and weighs about 3.2 pounds. Dell’s new 3000 Series laptops are entry-level devices, but the littlest member of the family has some premium touches including a touchscreen display and Gorilla Glass.

While larger 3000 Series notebooks have aluminum bodies, the 11.6 inch model has a plastic case. But that’s not surprising for a laptop that sells for less than $400.

It has the usual array of ports, including 3 USB ports, an HDMI port, Ethernet jack, and SD card reader.

Basically, the Dell Inspiron 11 3000 seems like Dell’s answer to the Asus VivoBook X202E and Acer Aspire V5-122P. It’s a portable touchscreen notebook with Windows 8. It just happens to be one of the first in its class with an Intel Haswell option, offering excellent battery life.

Just don’t expecting a Core i7  chip for that price. The entry-level Inspiron 11 is expected to ship with an Intel Celeron chip based on Haswell architecture.

via The Verge and Laptop Magazine