Most Chromebooks are small, inexpensive laptops designed to run Google’s Chrome OS software. But Dell’s Chromebook 11 stands out from the crowd thanks to a business-like design, a sturdy case, and a decent keyboard, among other things.

Dell’s Chromebooks are targeted at the education market, but they’re available for anyone to purchase. Prices start at $279 for a model with 2GB of RAM and an Intel Celeron 2955U Haswell processor. 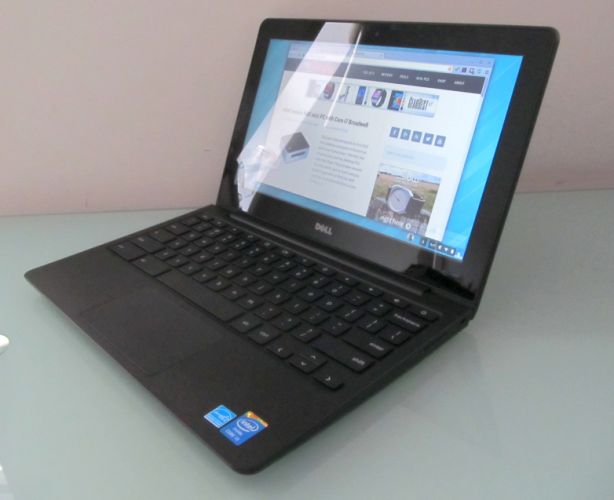 The Core i3 model is relatively expensive for a Chromebook, but pretty cheap by traditional laptop standards.

Dell loaned me a Chromebook 11 with a Core i3 processor to review, and while it’s not the cheapest Chromebook available (or the thinnest, or lightest, or the model with the best display), it’s a pretty solid portable notebook.

It offers great battery life, some of the fastest performance available from a Chromebook, a comfortable keyboard and touchpad, and generally offers a lot of value for the price… if you’re cool with the idea of an operating system based on the Chrome web browser.

It has two USB 3.0 ports, a full-sized SD card reader, an HDMI port, a headset jack, and stereo speakers

The laptop measures 11.6 ” x 7.9″ x 1″ and weighs 2.9 pounds. It features an 11.6 inch, 1366 x 768 pixel display which looks pretty good when viewed from the front or sides. But if you tilt the screen back too far colors will start to look washed out. The screen also doesn’t seem to be as bright as the displays on some other Chromebooks I’ve tested. 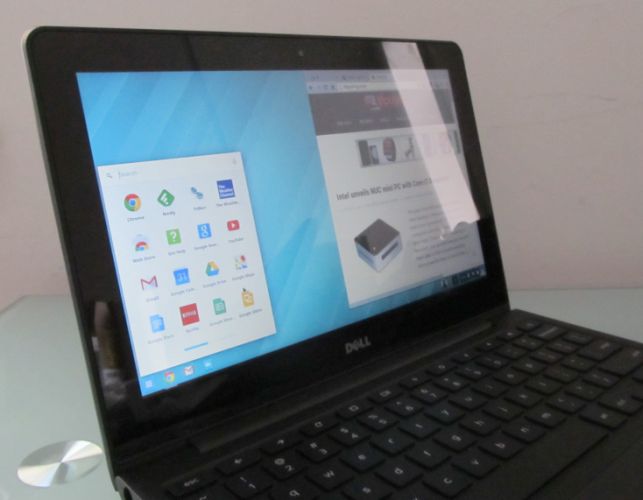 While the system is a bit thicker and heavier than some other Chromebooks, it also feels sturdier, which makes sense for a device aimed at the education market.

The case is clearly made of plastic, but the palm rest has a soft touch finish, and keyboard has well-spaced keys with decent travel. Typing is comfortable, although there’s a little flex in the center if you push down hard. 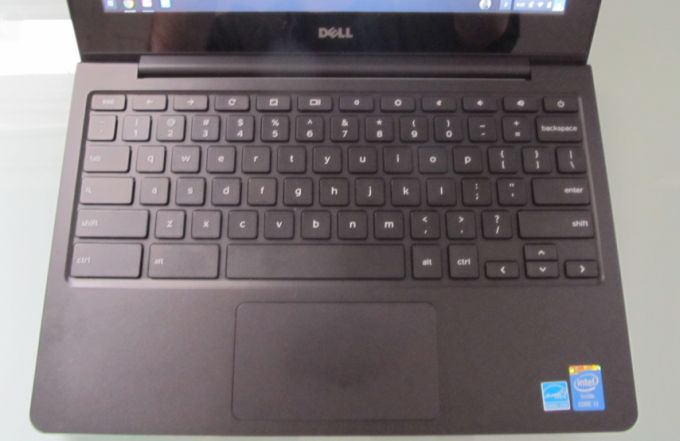 There’s a nice wide touchpad below the keyboard and it supports multitouch gestures including two-finger scrolling. 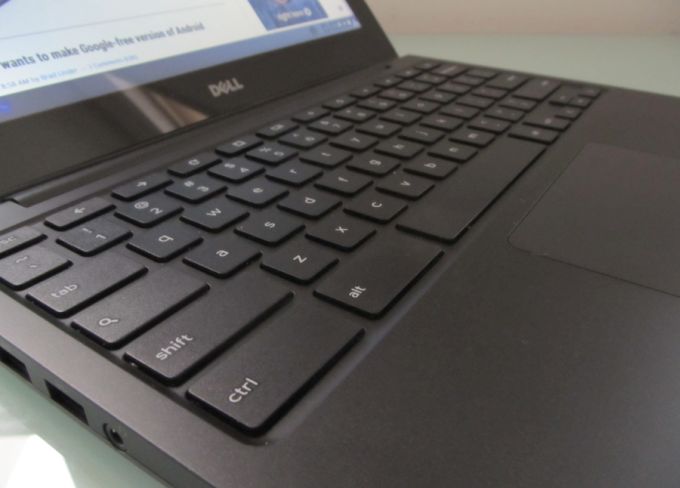 Acer’s laptop is a little thinner and a tad lighter than Dell’s. It’s also a little cheaper, with a list price of $350. But the Dell Chromebook 11 is a nicer looking machine, at least if you prefer a no-nonsense, all black design.

On the other hand, Acer’s Chromebook has a matte display which doesn’t reflect as much glare when used in bright settings as the Dell Chromebook 11’s glossy screen.

Chrome OS (and beyond)

Google’s Chrome operating system is based around the Chrome web browser — and one thing the Dell Chromebook 11 does very well is let you get online almost instantly. Open the laptop’s lid and the screen comes to life right away. By the time you can open a browser window or fire up a web app, you’ll probably already be connected to the internet.

Setting up a Chromebook the first time you use it doesn’t take much longer. Just wait a few seconds for the system to boot, enter your Google username and password and if you’ve ever used a Chrome web browser before Google will automatically sync your bookmarks, passwords, Chrome Web Apps, and other settings. 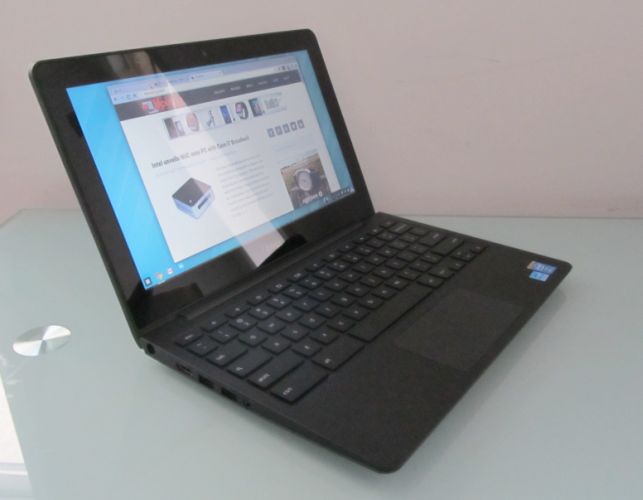 There are also a growing number of Chrome apps that can run even when you don’t have an internet connection, allowing you to edit documents, play games, respond to emails, or perform other activities even if you’re on an airplane, subway, or camping in the woods. Your data will be synchronized when you get back to civilization.

But for the most part Chromebooks are designed for running web apps. That’s why the Dell Chromebook 11 with a Core i3 processor is one of the most powerful devices in its category… but it still has just 16GB of storage. You’re not expected to install a lot of offline apps or load your entire music or movie collection on the device (although you could use an SD card to store some media). 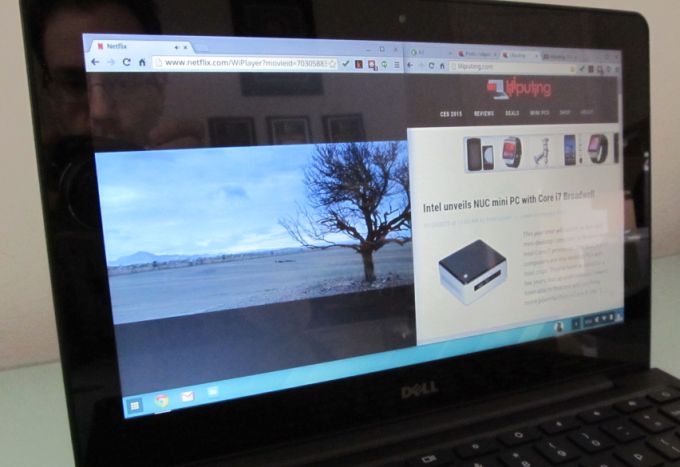 Instead the idea is to use this device to hop online in an instant and then stream content from YouTube, Netflix, Hulu, Google Play Music, or Rdio. You can play web-based games, read news and opinion on websites, catch up on social media, and more. Plenty of people who use Windows or Mac computers spend most of their time in a web browser, and those people will probably feel right at home with a Chromebook.

But if you’ve really got your heart set on running native apps, you can do that. Just follow the instructions for enabling developer mode on a Chromebook and then you can use the Crouton script to install Ubuntu or Debian in a chroot environment.

This means that the Linux distro of your choice will share the same kernel and drivers as Chrome OS (you won’t need to do anything to make sure WiFi, graphics, or other hardware work). It also means you can switch between Ubuntu and Chrome OS without rebooting, simply by pressing Ctrl+Alt+back or forward. 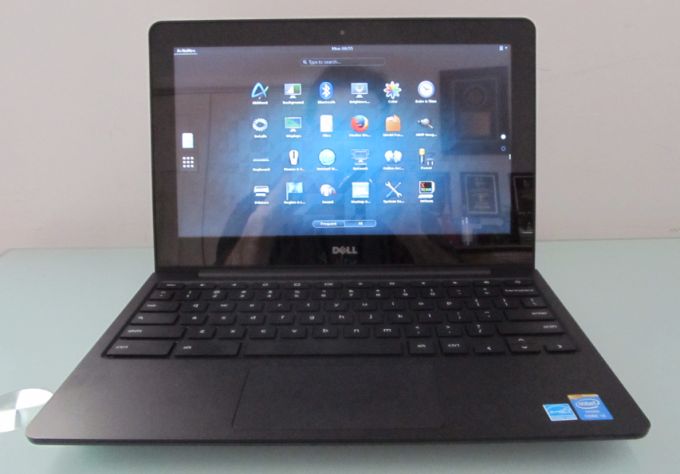 I used Crouton to install Ubuntu GNOME 14.04, which runs pretty well on the Chromebook 11. The only problem I’ve found is that the touchpad doesn’t recognize taps, so I need to remember to click instead of tapping when using Ubuntu on the laptop.

With Ubuntu running on the system I was able to download and install the Abiword word processor, GIMP image editing application, and even the Firefox web browser. 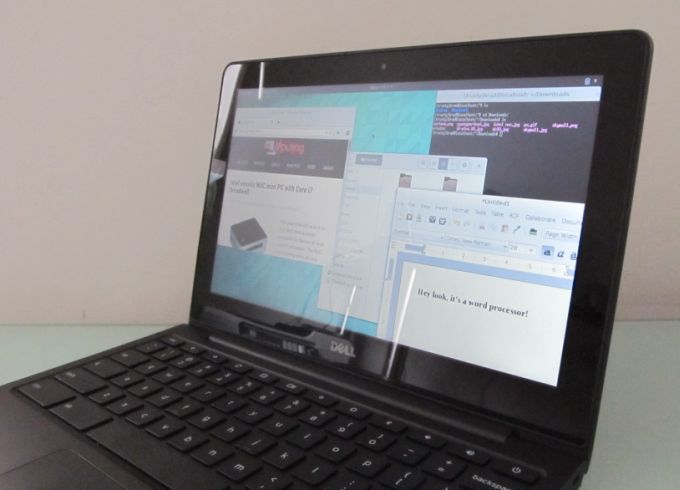 This lets me create and edit documents, modify and resize images, and do other things without an internet connection. GIMP comes in handy while blogging, since it lets me crop and resize photos with one tool — normally when I’m using Chrome OS I have to upload them to WordPress before I can resize them since the Chrome OS file manager/image viewer lets me crop but not resize pictures.

Chrome OS is a relatively light-weight operating system that boots quickly and feels pretty responsive even on devices with entry-level hardware. For basic tasks, it’s kind of tough to tell the difference between the Dell Chromebook 11 with a Core i3 Haswell processor and Chrome OS notebooks with Intel Celeron 2955 Haswell or even Intel Celeron Bay Trail processors.

They all boot quickly, resume from sleep even more quickly, and handle web browsing and video streaming tasks like champs. 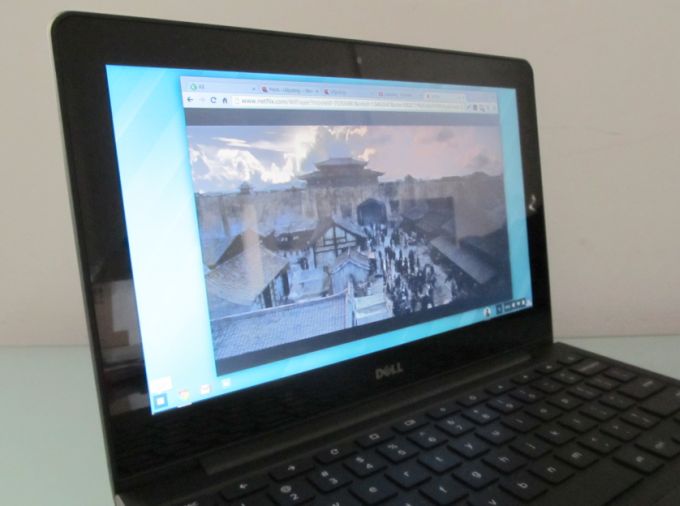 But models like the Dell Chromebook 11 which have 4GB of RAM and Intel Core chips score higher in benchmarks and never seem to slow down even when you have a dozen or more browser tabs open — something that can start to make Bay Trail models feel sluggish.

I ran a series of benchmarks which look at JavaScript and HTML5 performance and compared the results with those for Acer’s Core i3 Chromebook as well as a Celeron Haswell model from Acer and two Bay Trail Chromebooks from Asus and Samsung. 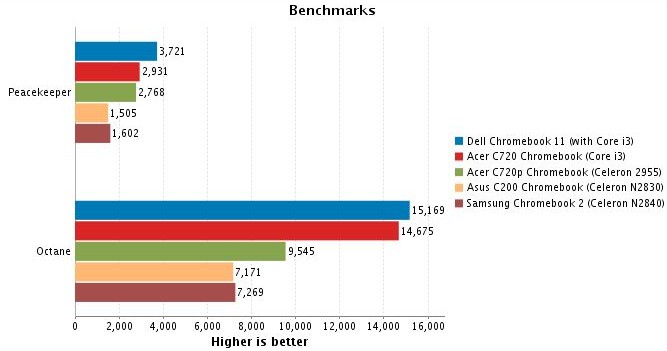 The Dell Chromebook 11 came out ahead of all the others… but it’s also running a newer build of Chrome OS. Google continually updates its operating system with features that could improve performance on these benchmarks… so if I ran these same tests on the other Chromebooks (which I’ve since returned to their manufacturers), the results might look a little different. 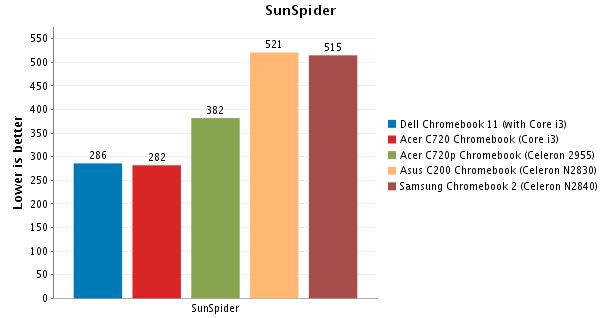 For many users, the extra boost you get from the Core i3 processor and 4GB of RAM might be overkill — you can save $100 by picking up a model with 2GB of RAM and a Celeron CPU.

But the more powerful option could come in handy for power users and folks who plan to install Ubuntu  or other operating systems. It’s also nice to be able to get a system that’s slightly more future-proof: since this is one of the most powerful Chromebooks available at the moment, odds are that it’ll still feel pretty zippy when running newer builds of Chrome a few years from now.

That’s especially important when you remember that Dell is positioning the Chromebook 11 as a device for educators and students. Schools probably don’t want to have to replace their computers every year or two.

It’s worth noting that it isn’t easy to upgrade the RAM or storage on this system. While you can open up the laptop by removing the screws holding the bottom cover in place, the memory and storage are attached to the motherboard. The wireless card is removable though.

While the Chromebook 11 is certainly fast, it’s also something else: kind of noisy.

There’s a big vent on the bottom of the laptop and the fan that keeps the system cool regularly blows air through that vent. 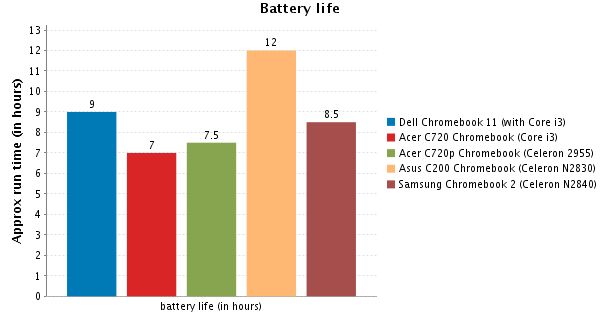 Dell says you should be able to get up to 10 hours of run time from the Chromebook 11, and while I never quite manager to squeeze that much battery life out of the laptop’s 50 Whr battery, I did come pretty close: the notebook seems to be good for about 9 hours of run time when surfing the web and doing some light work. 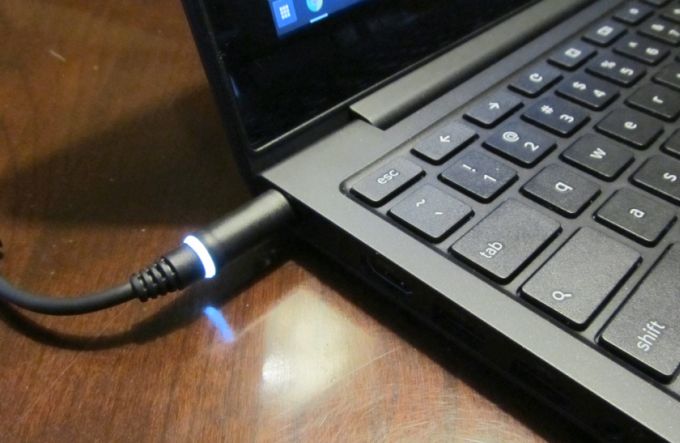 The laptop comes with a power brick and a charging cable that has a ring that glows when it’s plugged into a power source. These are a little smaller than some laptop power bricks, but not as small compact as a typical tablet or smartphone charger. 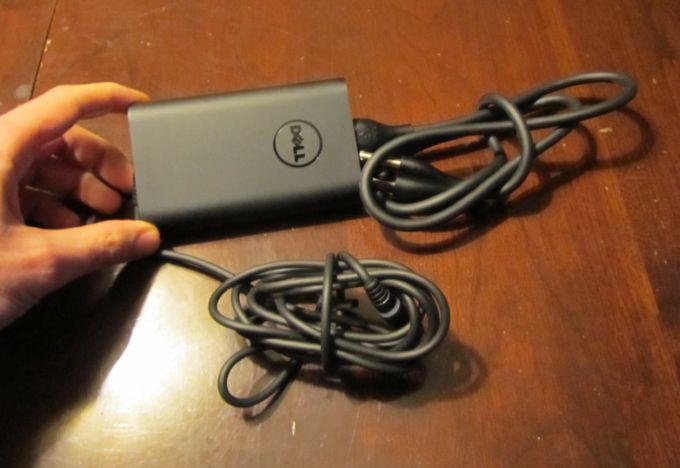 Streaming music to a Bluetooth speaker seems to cut down the battery life a bit, and I’d imagine resource-intensive activities such as gaming or streaming internet videos would also eat into your battery life a bit but I didn’t spend a lot of time doing either of those things.

Dell’s Chromebook 11 with a Core i3 processor is one of the fastest Chrome OS laptops I’ve tested… but I’d probably only recommend spending $379 if you’re really certain you need the extra RAM and speed that comes with this model. You can easily save $100 or more by grabbing a Celeron Chromebook with 2GB of RAM. 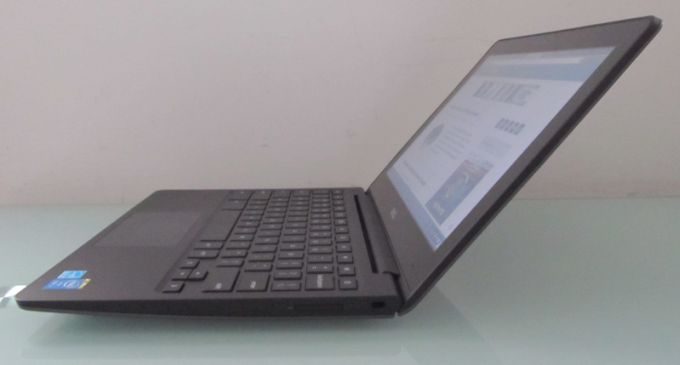 That said, the Dell Chromebook 11 certainly isn’t expensive, and it is compact, fast, and versatile… as long as you can live with 16GB of storage and an operating system designed for running web apps.