The Samsung Galaxy Note 10.1 is an Android tablet with a Samsung Exynos 4 quad-core processor, a 1280 x 800 pixel display, and a Wacom digital pen which supports pressure-sensitive input for writing or drawing on the screen.

But there are a limited number of Android apps designed to work with that pen… so why not run a full desktop-style operating system on the Note? 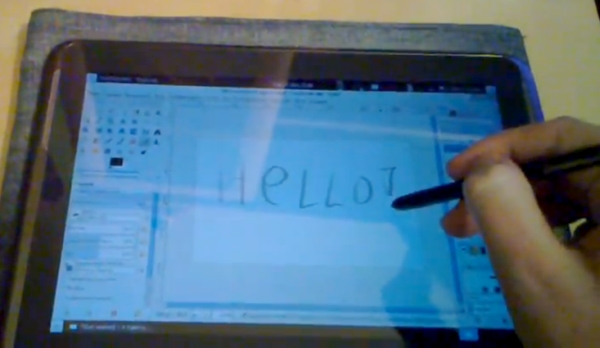 Xda-developers forum member exception13 has been working to port Debian Linux to run on the Note for a few months. While some features (including GPS and the camera) aren’t fully functional yet, the tablet does support WiFi, Bluetooth, sound, and digital pen input when running Debian.

Exception13’s system is set up using a dual boot configuration, so he can also boot into Android when he’s not using Debian.

But that’s not the point. The point is that you can run desktop Linux apps and use the Note’s digital pen to enter text or draw pictures, turning the Note 10.1 into a powerful graphics tablet.

For instance you can use the GIMP image editing program to draw right on the screen, or enter text into a word processor or note-taking app using your own handwriting.

Or I suppose you could wait for Wacom to release a mobile graphics tablet of its own.

You can find more details in the xda-developers thread, or check out the source code at Google Code.

3 replies on “Debian Linux on the Samsung Galaxy Note 10.1 (with pen support) – video”