The vast majority of smartphones in the world ship with some version of Google’s Android operating system. And most of them are only supported by their manufacturers for a few years.

Have a phone that’s 3-4 years old? Then you’re probably not getting any Android updates anymore. No more security patches. No new features.

Of course, some folks can run custom ROMs such as LineageOS, which lets you install updates indefinitely… but want to break out of Android altogether? There are a handful of other GNU/Linux-based operating systems including Ubuntu Touch, postmarketOS, and Maemo Leste that are designed to, among other things, help give your phone a longer lifespan.

One tricky thing can be figuring out which phones are supported. That’s where a new Can My Phone Run Linux database from TuxPhones comes in. 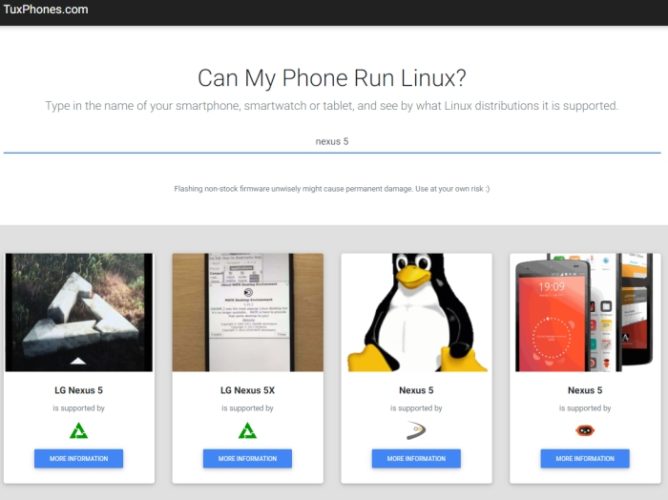 In a nutshell all you have to do is type your phone’s model number into a box at many.tuxphones.com and if your phone is one of the 200+ models in the database, you’ll see listings for the GNU/Linux distributions that support your device.

Have a Nexus 5? It’s supported by all three of the Linux-based operating systems mentioned above. Have a first-gen Pixel or Samsung Galaxy S7? Then your phone can run postmarketOS.

Have anything much newer? Good luck.

It’s also worth keeping in mind that replacing the firmware on your phone requires unlocking your bootloader, wiping your data, and installing software that’s typically developed and supported by volunteers. So plan accordingly.

Many of these Linux-based operating systems are still very much a work in progress. And support for most phones is limited — not all of your hardware may work.

Still, it’s nice to have a one-stop shop to find out if your phone is currently supported by one of these free and open source software projects… or which old phone you might want to pick up on eBay if you’re looking to check out one of these operating systems on something a bit more powerful than the $149 PinePhone.

Oh, one more thing to keep in mind — the TuxPhones database is new and may be incomplete or have other kinks to work out. It’s using data scraped from websites for various Linux smartphone projects and the developer plans to add more details about support info, merge the results so you see a single card for each phone rather than a unique card for each phone + operating system, and a better mobile interface.

There are also plans to add data about several other Linux-based smartphone operating systems including SHR and LuneOS.