Decades ago a computer needed to be about the size of a room in order to get anything done. These days we carry little computers called smartphones in our pockets. But if you look under the hood, the bits that actually do the hard work are actually smaller than that — the screen, battery, and other components take up more space than the processor, memory, and storage.

That makes it even smaller than the tiny Gumstix Overo Cortex-A8 system. 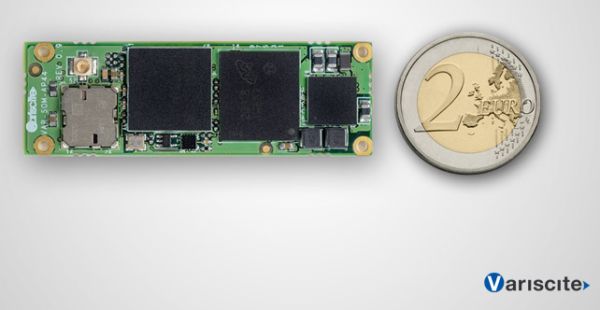 It’s a complete system-on-a-module, sporting 802.11b/g/n WiFi, Bluetooth 4.0, and support for HDMI, SD cards, USB, cameras, and more. You’ll need to hook up your own I/O ports if you actually want to use some of those features though.

Unfortunately the DART-4460 isn’t really aimed at end users. Instead it’s a platform that system builders can use to create thin and light tablets, media players, or other devices.

Still, it’s pretty remarkable to see just how small the guts of a computer have gotten. This module isn’t exactly going to power a high-end Windows gaming system (it could theoretically support Windows RT, but not Windows 8). But with the same processor used in the Amazon Kindle Fire HD tablet, the DART-4460 should have enough power for watching videos, playing games, or surfing the web on an Android-powered device.