The CyanogenMod team has been on a roll lately, releasing a series of new apps and features for the popular custom version of Android. But following the recent announcement that CyanogenMod has formed a company, raised $7 million in venture capital, and started turning custom ROM building into a full-time job for more than a dozen people, one of the high profile new apps is no more.

Moving forward, the Focal camera app will no longer be included in CyanogenMod. Update: But you can now download it as a standalone app from the Google Play Store. 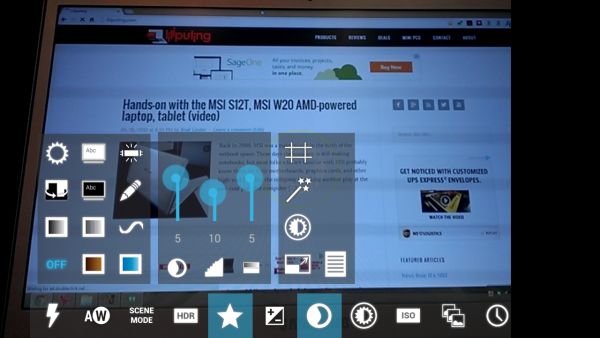 Focal is a camera app designed not only to offer a ton of options for fine-tuning your photos, but an innovative way of accessing those features. Just swipe from the side of the screen to bring up icons for all the different settings menus, and when you tap any menu (such as white balance, HDR mode, or ISO), the menu will pop up and stay on the screen even as you add more menus.

Focal’s been included in nightly builds of CyanogenMod for a few months, but some folks had complained that it was unstable (which is hardly surprising for a feature included in a nightly release). That’s not the reason it’s going away though.

As the folks at Android Police summarize, there appears to have been a dispute between the developer of Focal and the folks who are now running CyanogenMod regarding licensing terms of the app. Since CyanogenMod may eventually be sold to device makers for inclusion on phones, the licensing situation is getting much more complicated.

Update: Focal developer Guillaume Lesniak gives his side of the story in a lengthy post on Google+. In a nutshell, in order for CyanogenMod to offer custom versions of their software to carriers and device makers, the team wants to use a different license than GPL (so that proprietary camera drivers, for instance, can be used) which upsets some members of the developer community — especially folks who contributed work for free, only to find out that CyanogenMod Inc will be making money off that work.

Lesniak and other developers of CyanogenMod have been in discussions about the inclusion of the Focal camera app for months, but ultimately Lesniak decided the best way to resolve the situation was to remove the app from CyanogenMod.

The app continues to be released under a GPL license, and he says it could find its way into other custom ROMs.