The developers of CyanogenMod plan to make it easier to install their custom version of Android on phones and tablets with a new tool called CyanogenMod Installer.

It’s expected to hit the Google Play Store in the next few weeks, but replacing the software that came with your phone won’t be quite as simple as downloading and running an Android app. Instead, that app will help walk you through the process of loading CyanogenMod on a supported device — and direct you to a website where you can download a desktop app that will do all the heavy lifting for you.

The folks at Geek.com got a chance to test a pre-release version of CyanogenMod Installer, and it seems to work as promised. 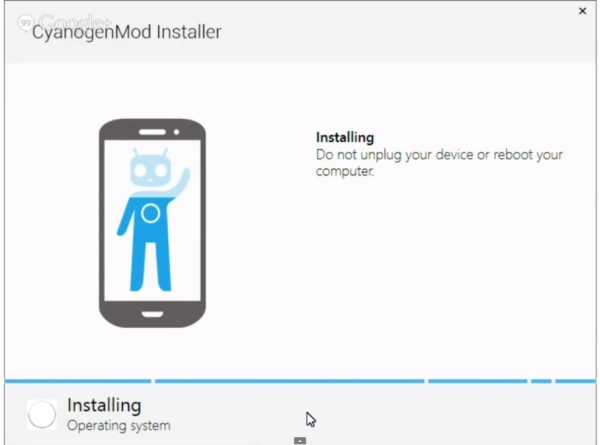 Geek’s Russell Holly used the installer to load CyanogenMod onto a 2012 Google Nexus 7 tablet, and the entire process took less than 10 minutes.

More importantly, there wasn’t any fiddling with drivers or typing commands into a terminal window required. Just connect the tablet to your computer with a USB cable, run the desktop app, and click the next button a few times while the software connects to your tablet, loads the custom firmware, and reboots your device.

Note that installing CyanogenMod using this tool will wipe all the data on your device, which means it’ll delete the software that came with your device and remove all your apps, photos, or other files. So make sure to backup anything you want to keep (you can always re-download purchased Android apps from the Google Play Store).

That’s the kind of warning that’s about to become way more important. It’s probably pretty clear to folks that manually flash custom ROMs on their phones and tablets that doing so will likely wipe their data — but this sort of tool is designed to make ROM flashing a lot simpler for experts and beginners alike.

4 replies on “This is how CyanogenMod Installer will work (video)”