Want to install CyanogenMod on your phone or tablet, but don’t want to fiddle with unlocking your bootloader, learning how to use adb and fastboot, and other command line tools?

CyanogenMod Installer is now available from the Google Play Store. Install and run the app, follow the instructions, and if you have a supported device, it will walk you through the process of replacing the software that game with your Android phone with the latest build of CyanogenMod’s custom version of Android.

Update: Note that while CyanogenMod Installer makes it very easy to install CyanogenMod on a supported device, it will wipe your data, and it doesn’t provide a way to restore the original software that came with your phone — you’ll need to figure out how to do that on your own. 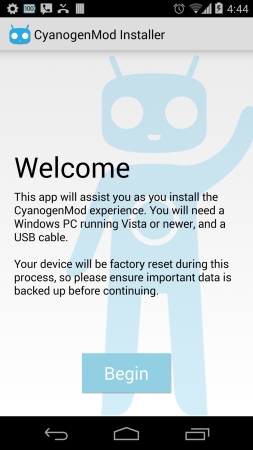 While the Android app gets you started, there’s actually a PC app which does the heavy lifting. The mobile app will prompt you to visit https://get.cm to download the CyanogenMod Installer desktop app for Windows Vista or later, and once it’s installed it will connect to your phone and attempt to install CyanogenMod for you.

Unfortunately you have to go through the first few steps to find out whether you have a device that’s actually supported — the process could use a bit of streamlining.

You can save yourself a little heartache by checking out the official list of supported devices before beginning. While the latest flagship devices from Samsung, HTC, and Google (not counting the Nexus 5 as of 11/12/2013) are included, older and less popular devices are a bit more scarce on the list at the moment. 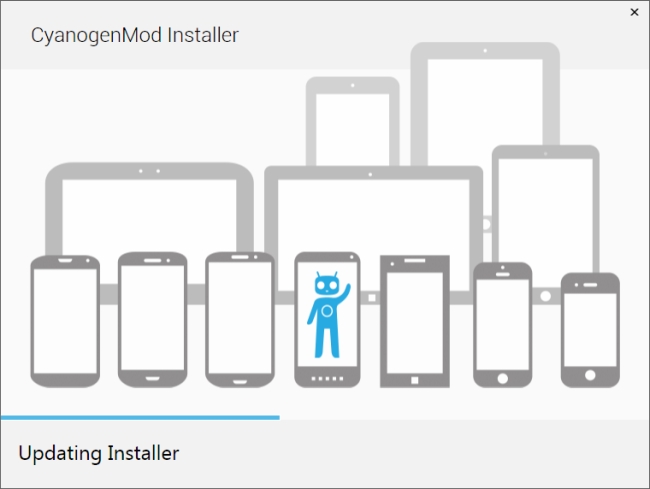 But this might be the most user-friendly way to unlock a bootloader and load custom firmware on an Android phone. The only catch is that it only installs one type of custom firmware — CyanogenMod.

While the team’s custom version of Android is one of the most popular around, it’s not the only game in town. Other popular custom ROMs include Paranoid Android, which is known for pushing new features like per-app DPI settings and Facebook chat head-style notfications or AOKP, which is known for a huge range of customization options.

A new player is an Android ROM called OmniROM, which will feature support for multi-window apps, among other things. And the developers of OmniROM plan to take a page out of CyanogenMod’s book by creating a universal installer — but theirs will be a bit more universal than the CM Installer, letting users install a number of different types of custom firmware.