The CyanogenMod team is launching a new online service that that lets you locate a missing phone, remotely wipe it, or perform other actions. If that doesn’t sound original, it’s because there are a number of similar service already available.

But the folks behind the popular custom version of Android say that their solution is more secure — and since it’s open source anyone can look under the hood to see exactly how everything works and identify security or privacy vulnerabilities.

You can check out the source code at Github before CyanogenMod Accounts are available to the public. 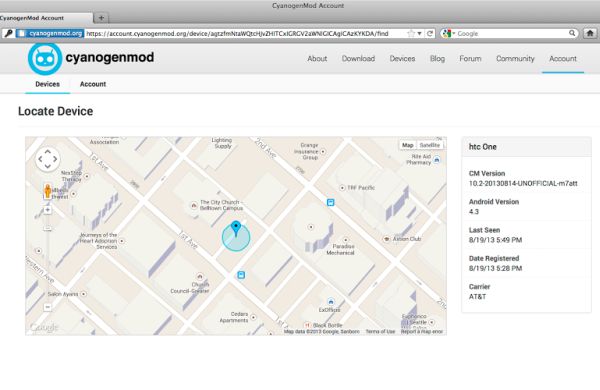 The new CyanogenMod Account service is free and optional for CyanogenMod users. At launch it’ll basically just offer find and wipe functions through the CM team’s servers. Eventually additional services including secure SMS will be offered through the same system.

Data is encrypted, and the team says they have no plans to sell your data as a way to make money. And only users can track a device or erase data — the server never even has your password. That means that you shouldn’t have to worry about a member of the CyanogenMod dev team taking out your phone.

This isn’t the first move CyanogenMod’s developers have made to improve security and privacy. Founder Steve Kondik recently began contemplating ways to reduce reliance on root access, and this summer the team added a “Privacy Guard” feature which lets you run apps in a sandbox so they can’t access your contacts, messages, or other personal data.