Recently the folks at Linaro have been showing off a build of Google Android which runs much faster than the latest official versions from the Android Open Source Project thanks to toolchain optimizations and the use of GCC 4.7.

We’ve already started to see custom ROM builders incorporate the Linaro toolchain into custom versions of Android for smartphones and tablets such as the Amazon Kindle Fire.

But if you’d been hoping to see the Linaro toolchain in the next official version of CyanogenMod, it looks like you may have to keep waiting. 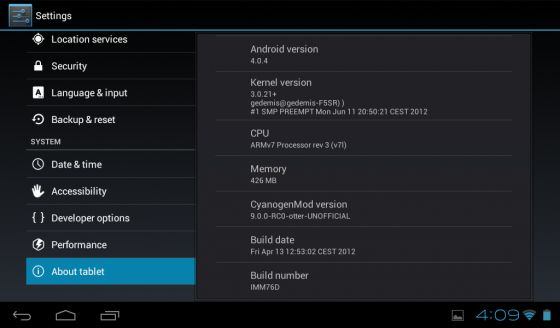 CyanogenMod is one of the most popular custom firmware options available for dozens of Android devices. It includes a number of performance tweaks and special features that can make Android faster or easier to use on those devices.

But since CyanogenMod supports such a wide range of devices these days, developers are a little more conservative than they used to be. Founder Steve Kondik recently rejected a proposal to incorporate the Linaro Toolchain, because it’s not as stable as some other options and works better on some devices than others.

The good news is that while the Android Open Source Project isn’t ready to move to GCC 4.7 yet, both AOSP and CyanogenMod (which is based on AOSP) are moving to GCC 4.6 which should offer some improvements in speed.