Now that Asus has provided a way to unlock the bootloader on the Asus Eee Pad Transformer Prime, we’re starting to see people loading custom firmware on the tablet. 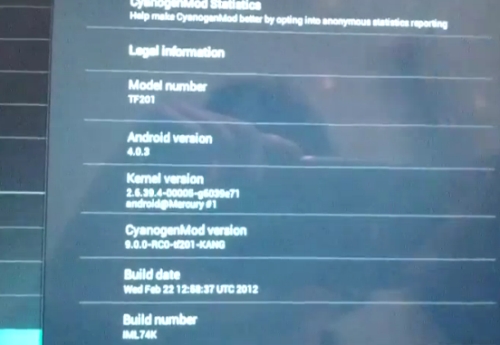 Earlier we showed what Ubuntu Linux looks like on the Transformer Prime. Now the folks at Androidroot.mobi have posted a tool for installing ClockworkMod Recovery and a video showing an early build of CyanogenMod 9 on the tablet.

The Eee Pad Transformer Prime is one of the first devices to feature an NVIDIA Tegra 3 quad-core processor. The 10 inch tablet also has a 1280 x 800 pixel display and Asus has already offered an official Android 4.0 software update.

But if that’s not good enough for you, ClockworkMod Recovery is a utility that you can use to backup or restore all the data on your device (including your operating system), or install custom software such as Ubuntu or CyanogenMod.

The CM9 software for the tablet isn’t available to the public yet, but AndroidRoot.mobi plans to make a public beta available in the next few days. I suspect they’re not the only ones working on this kind of project either.