The CyanogenMod team has released the first build of Android 4.0 for the HP TouchPad tablet with support for hardware-accelerated video playback. That means you can watch HD video from YouTube and you should have an easier time playing HD videos stored on your device, but Netflix still isn’t supported yet.

Update: Alpha 2 is available, and Netflix is working. 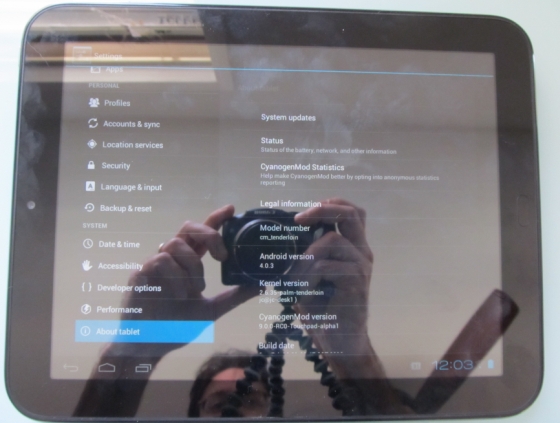 The latest build also offers improved touchscreen performance and a few other changes, but it’s still based on the 2.6.35 kernel. Video and other features may work better if and when the team can move to the 3.0 kernel.

If this is your first time installing CyanogenMod 9 on the HP TouchPad, you can follow our step-by-step guide.

If you’ve already installed an earlier version of CyanogenMod 9 on the HP TouchPad, you can upgrade to CyanogenMod 9 Alpha 1 (or 2) using the following steps:

You may also want to wipe your cache partition before rebooting, but it’s not strictly necessary.

After upgrading from Alpha 0.6 to Alpha 2, I’ve had no problems watching HD video from YouTube — but I do find that the tablet doesn’t stay connected to my WiFi network as reliably as it once did. Your results may vary.

The HP TouchPad tablet launched in mid-2011 for $499 and up, but HP canceled the tablet after less than two months on the market and liquidated its remaining supply for prices as low as $99. The tablet became popular with bargain hunters… as well as with hackers looking to replace HP’s webOS software with Android.

But if you never managed to get your hands on a cheap TouchPad, you can always try the Amazon Kindle Fire or Barnes & Noble NOOK Tablet — both of which now support custom ROMs.