There’s a new build of CyanogenMod 9 available for the HP TouchPad. The latest version includes a handful of bug fixes and a few new features for Android 4.0 Ice Cream Sandwich on HP’s discontinued tablet.

Update: There’s another new build. You can install Alpha 0.6 the same way you installed Alpha 0.5 by following the steps below.

Update 2: Nightly builds of CyanogenMod 9 Alpha for the HP TouchPad are now available. You can find the latest nightlies by following @CM-Tenderloin on Twitter. 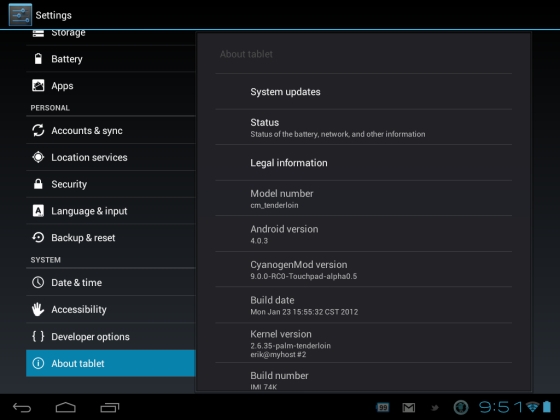 This is still unofficial software which is not supported by HP, and it’s still an alpha release — which means that there are still a number of bugs. For instance the camera doesn’t work and there’s no hardware video acceleration.

But here’s what’s new in CyanogenMod 9 Alpha 0.5 for the TouchPad:

When that’s done you should be running the latest build of Android 4.0 based on CyanogenMod 9 for the HP TouchPad.

If you haven’t already installed an earlier build of CM9, you can follow our step-by-step instructions — but use the new Alpha 0.5 instead of Alpha 0.