The Amazon Kindle Fire has a reasonably speedy 1 GHz TI OMAP4 dual core processor. But at times the tablet can feel a bit sluggish when you’re running Amazon’s custom version of Android. The tablet seems to pause for a moment sometimes when launching apps, for instance, or when scrolling between pages in an eBook or magazine.

But since I replaced Amazon’s version of Android with CyanogenMod 7, the tablet has felt much more responsive. CyanogenMod 7 is a version of Android 2.3 Gingerbread based on the Google Android Open Source Project. It includes a number of performance and visual tweaks as well as a persistent toolbar which offers home, menu, back, and search buttons at the bottom of the screen.

Interestingly, I’ve run a few benchmarks on the Kindle Fire while running Amazon’s software and CyanogenMod and there doesn’t seem to be much of a difference in overall performance.

In fact, the tablet scored nearly identical marks when I ran the CF-Bench utility. This test looks at overall performance by running a series of sub-tests. 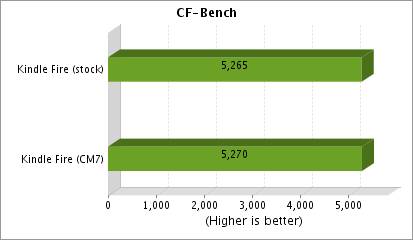 I also ran the SunSpider JavaScript benchmark using the Dolphin HD web browser on the Kindle Fire running both versions of Android, and there wasn’t much difference in the scores. 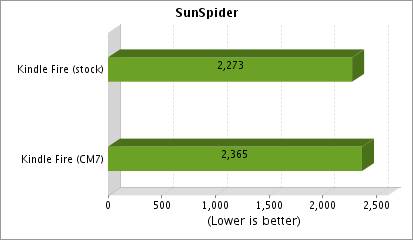 The Kindle Fire feels more responsive with CyanogenMod, but the truth is the tablet is reasonably fast no matter which version of Android you’re using.

While CM7 might not give you much of a performance boost though, the operating system does make it much easier to customize your tablet.

CyanogenMod ships with the ADW Launcher application launcher and home screen app. This lets you customize multiple home screens with app shortcuts and widgets. You can also download and install a different app launcher if you like.

You can also change keyboards simply by downloading and installing alternate keyboard apps from the Android Market or other sources when you’re running CyanogenMod. To do that while running the Amazon software you need to root your tablet, manually copy the keyboard app to your /system/app directory, and adjust the file permissions. Even then, only some keyboards seem to work. 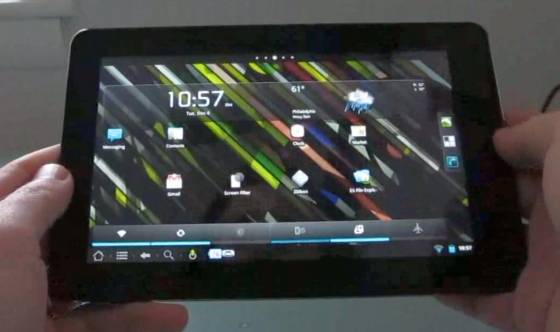 There are still a few problems with CyanogenMod for the Kindle Fire. .

Update: There’s a new version of CM7 which does support audio.

You also can’t run the Kindle Fire version of the Amazon Kindle app which offers access to the Kindle Owners’ Lending Library and Amazon’s “personal documents” service which lets you email eBooks and other content to a Kindle.

The Amazon Instant Video app also won’t work with CyanogenMod, since it’s designed not to run on devices that have been rooted.