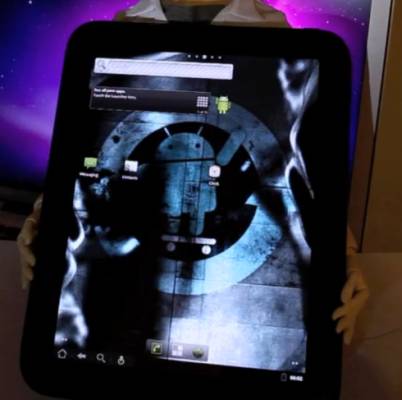 Update 9/17/11: CyanogenMod now has WiFi working, audio partially working, and the accelerometer working. You can find a second video with more details below.

The independent developers working to bring Google Android to the HP TouchPad are making very fast progress. Just a day after the TouchDroid team showed off support for multitouch input on the tablet, a developer with the CyanogenMod team posted a video showing much, much more.

It looks like the touchscreen is working, the accelerometer is working, and graphics drivers are in place.

Update: As of September 12th, the CyanogenMod team has basic support for WiFi and the beginnings of support for audio, but the project still remains a somewhat buggy work in progress.

HP’s tablet ships with the webOS operating system, but early reviewers complained that the tablet felt sluggish at times when running webOS, despite the fact that it has a fast 1.2 GHz Qualcomm Snapdragon processor. But in this video, it looks like Android 2.3 Gingerbread runs about as well on the TouchPad as on any other smartphone or tablet I’ve seen.

Hopefully it won’t be long before CyanogenMod works out the kinks and uploads a build of CyangonMod 7 for anyone to download and install on the tablet. One of the best things about this particular project is that CM7 will dual boot with webOS, which means you won’t have to uninstall the original operating system to try out Android on the TouchPad.

Interestingly, the CyaongenMod developer claims that the TouchDroid team only managed to get the touchscreen working on the tablet by modifying a CyanogenMod driver, without giving credit where it was due. Team TouchDroid has a different take on the situation.

Update: While the CyanogenMod software isn’t yet available for download, you can install an early, partially functional version of Android on the tablet now. The TouchDroid development team has disbanded after a spot of controversy, but as a parting gift one of the members has posted the existing code along with instructions for installing it. Wireless isn’t working yet, the screen colors are all wrong, and there’s no support for hardware buttons on the tablet yet. You’re probably better off waiting for the CyanogenMod build, but for the first time it’s possible for anyone to install Android on the tablet.

Update 9/17/11: About ten days after releasing this video, the CyanogenMod team released an updated video showing even more features working. WiFi now seems to be fully supported, audio is partially supported, and the accelerometer works.

Unfortunately there are still a few issues. The tablet has a dual core processor, but for now CyanogenMod only uses one core. Audio is still a work in progress. And support for the Android Market is limited.

7 replies on “CyanogenMod 7 on the HP TouchPad: Nearly everything working”