French consumer electronics company Archos makes some of the cheapest Android tablets that you might actually still want to consider purchasing. That’s because devices such as the Archos 7 Home Tablet, Arnova 7, 8, and 10 tablets have relatively fast processors, support for a wide range of audio and video codecs, and decent, if not particularly exciting designs. Oh yeah, and they’re pretty hackable too. 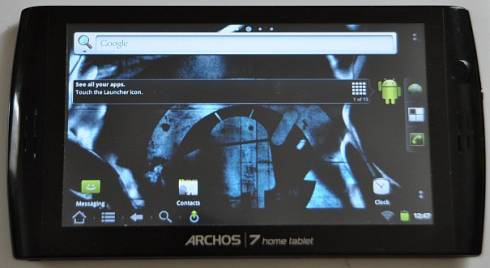 While these tablets tend to ship without access to the Google Android Market, for instance, people have been installing an unofficial market app for ages, allowing users to download and install thousands of Android apps.

Now you can also install an unofficial build of CyanogenMod 7. CM7 is a full replacement for the Android software that comes on you device. It’s built from code in the Android Open Source Project and based on Android 2.3 Gingerbread. It also includes hundreds of tweaks which make it one of the most popular custom ROMs for dozens of Android smartphones.

While the CyanogenMod team doesn’t officially support the Archos tablets or any other devices with Rockchip 2818 processors, xda-developers forum member fun_ has been porting CM7 to run on the Archos budget tablets as well as a few other devices.

Currently the project supports audio, touchscreen input, accelerometer access, SD cards, wireless, and the Android Market. There’s no support for hardware video acceleration at this point, and there may be some other bugs.

This isn’t the first time we’ve seen CyanogenMod ported to run on Archos tablets. Recently an unofficial build was released for the Archos Gen8 line of tablets including the Archos 43, Archos 70, and Archos 101.