The CyanogenMod team has started rolling out the “final” build of CyanogenMod 10 for a number of phones and tablets. Final is in quotation marks because while CM10 is graduating from release candidate, nightly, and M-series releases, the team is still accepting bug reports and may offer fixes.

But basically this is the feature-complete version of CyanogenMod’s custom Android 4.1-based operating system. You can check to see if it’s available for your device at the get.cm website. 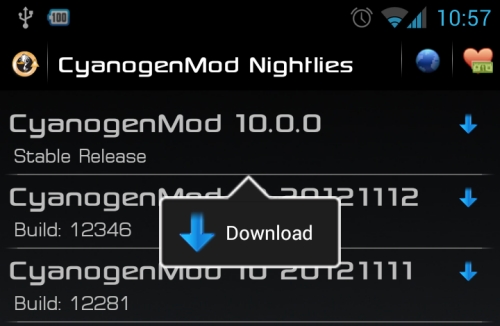 So far builds are available for a number of devices from Samsung, HTC. LG, Motorola, and others. If your device isn’t listed yet, you can keep checking back — the CyanogenMod build servers are still cranking out updates for each device.

Stable may also be a bit optimistic for some devices. For instance, I’m running CyanogenMod 10 on an HTC One XL (AT&T model) smartphone at the moment. While developer h8rift has done an amazing job getting CyanogenMod to run almost as well on the phone as HTC’s official software, some users have complained about wireless signal problems and battery life leaves a bit to be desired.

I don’t expect development for phones like this to stop just because CyanogenMod 10 is at a “stable” release.

What’s more, the CM team is already looking ahead to future builds of the operating system, which will be based on Google Android 4.2 rather than Android 4.1.