The Dell Streak 7 may be discontinued. But that hasn’t stopped independent developers from keeping the 7 inch tablet’s software up to date. There’s already an unofficial build of Android 4.1 Jelly Bean for the Dell Streak 7. 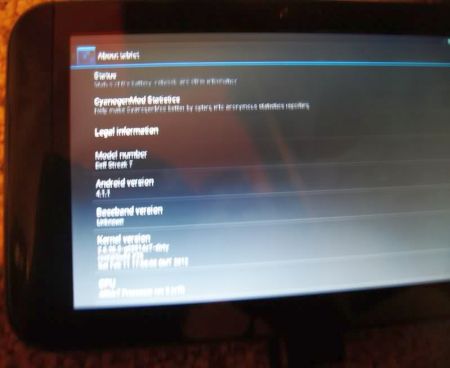 When Dell launched the Streak 7 in early 2011, it was one of the first tablets available with an NVIDIA Tegra 2 dual core processor. It also happened to be hampered by a low resolution 800 x 480 pixel display and Android 2.2 software at a time when higher resolution displays and Android 3.0 were all the rage.

Now TabletROMs forum member giveen is working to do the same thing with Android 4.1 Jelly Bean.

The update brings a faster user interface, improved search, a better keyboard, and Google’s Answer to Siri: when you ask your tablet certain questions it will answer by speaking the answer out loud to you.

Jelly Bean for the Dell Streak 7 is still a work in progress. Some important hardware functions aren’t working yet. But Bluetooth, touch, and other features are working.

If you don’t already have a Dell Streak 7, you can pick up a refurbished model from eBay for $140. But honestly, at that price I’d save up a little more money and get a Google Nexus 7 instead.

Still, giveen’s progress is great news for folks that already have Dell Streak 7 tablets and want to run the latest version of Android on them.