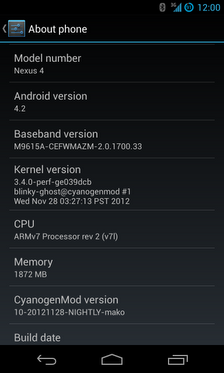 CyanogenMod is a custom version of Google Android that offers performance tweaks, customization options, and other software changes. It’s based on the Android Open Source Project, but it gives users a bit more control over their phones and tablets than the software that typically comes with those devices.

It also provides an upgrade path for many users who have phones or tablets that come from device makers that haven’t provided official updates to the latest versions of Android yet.

CyanogenMod 10.1 is based on Google Android 4.2 Jelly Bean, and while the Nexus 4 is one of the first phones that already ships with Android 4.2 users that want special features which may only be available in CyanogenMod or other custom ROMs may already be looking for alternatives to the stock software.

That said, if you’re thinking about taking one of the first nightlies for a spin, keep in mind these are the first nightly builds. In other words, some things may be broken. It’s probably a good idea to hold off on testing this on your primary phone if you need everything to work perfectly.

If you want to go ahead and give it a try, just follow our guide for unlocking the Nexus 4 bootloader and using a custom recovery, then download the latest nightly from the CyanogenMod page and install it using ClockworkMod or TWRP recovery. It’s probably a good idea to backup your device first.

CyanogenMod 10.1 nightlies should also be available for the Google Nexus 10 tablet soon.