Now that it’s possible to get around the locked bootloader on the Barnes & Noble NOOK Tablet and load custom ROMs and other software on the 7 inch tablet, independent developers are working to make it easier to manipulate the tablet.

A hacker going by the name of fattire has released a new tool called CyanoBoot which gives the NOOK Tablet a new boot menu that lets you choose the software you want to run when you turn the tablet on. 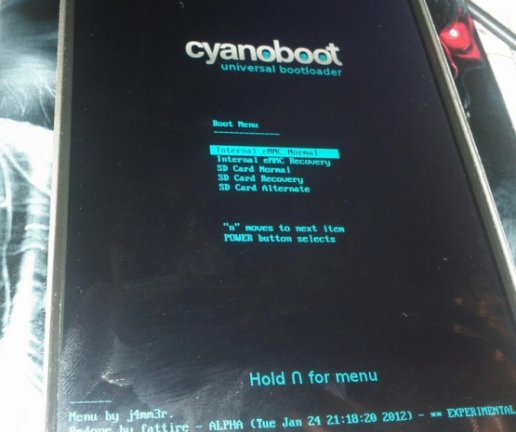 This could be one of the first steps toward creating a dual-boot system capable of running both the default Barnes & Noble software and a third party ROM such as CyanogenMod.

NOOK Color users can already do something similar on the first tablet from Barnes & Noble by loading CyanogenMod, Ubuntu, or other software on a microSD card while leaving the default B&N software intact in internal storage.

Cyanoboot is still in the very early test stages and it’s a bit difficult to install, so unless you really know what you’re doing you should probably wait until it’s been further tested and refined. But the utility makes it possible to boot normally from internal storage or an SD card or boot into recovery using either storage location.

It’s designed to work with ClockworkMod Recovery, TWRP 2, or other recovery apps.