Sure, the Vizio Co-Star brings Google TV to your television set for just under $100. But the CX-01 brings Android 4.0 to your TV for half the price.

The CX-01 is a mini PC that’s the size of a large USB flash drive. It has an Telechips TCC8920 ARM Cortex-A5 single core processor, 512MB of RAM, 4GB of storage, and runs Android 4.0 Ice Cream Sandwich.

Pandawill is selling the little computer for $48. It’s been available for purchase since last month, but now some of the first customers are receiving the CX-01 and sharing their impressions. 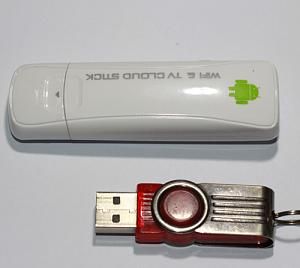 There’s an HDMI adapter on one end which you can plug into a TV or monitor, and a full-sized USB port on the other side which you can use to connect a mouse, keyboard, or remote control. There’s also a micro USB port which can be used for charging.

Out of the box, the CX-01 includes access to the Google Play Store and support for 1080p HD video playback in a variety of formats.

It’s not rooted, but it also doesn’t look that hard to enable root access.

Unfortunately there’s no SD card slot, which means that if 4GB of storage isn’t enough for you, you’ll want to look into connecting an external disk using the USB port. You can also stream videos from a shared network drive, so if you have movies on your PC hard drive, you can use the CX-01 to stream them — as long as the bit-rate isn’t too high.

According to CNX Software, the processor runs at up to 812 MHz and the device feels comparable to an MK802 Mini PC (which has an Allwinner A10 ARM Cortex-A8 processor and sells for $70 and up).

Other users suggest that the CX-01 can actually run more Android apps than the MK802.

On the other hand, the MK802 has a microSDHC card slot and can boot from removable storage, which makes it possible to run Ubuntu, Fedora, and other Linux-based operating systems in addition to Android.

It’s possible that we could eventually see other Linux-based operating systems ported to the CX-01 and similar devices. Telechips recently released the GPL source code for the Linux kernel.

But the 4GB of internal storage isn’t much to work with. DealExtreme offers a similar device called the C77 with 8GB of storage for $55.