If you’re one of a thousand folks who pick up a special Entertainment Weekly magazine in New York or Los Angeles this week, you may end up getting a dirt cheap Android smartphone as part of the deal.

The CW took out a special ad which includes a video screen that displays information about some of the network’s fall shows, as well as live updates from the CW Twitter feed. When the folks at Mashable ripped apart the advertising insert, they found the secret sauce: the guts of a modified Android smartphone. 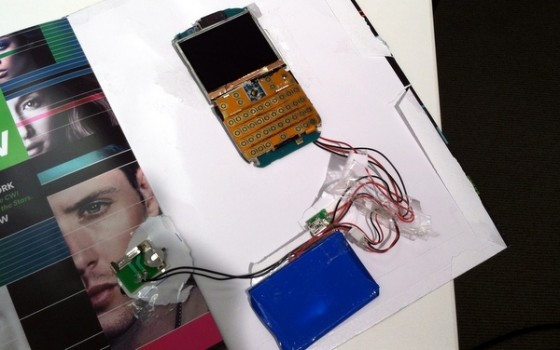 When you open the magazine, a small screen springs to life, connects to the internet, and starts displaying data (although the process takes a little while).

But there’s more than just a screen. If you rip open the paper covering the electronics, you’ll find the screen is connected to a motherboard for a generic Chinese smartphone. There’s a speaker, a spot for a rear-facing camera, and a rather big battery pack.

There’s no touchscreen. Instead this appears to be an Android-powered BlackBerry clone with a QWERTY keyboard — but the keypad has been ripped off. You’ll need a piece of metal to make contact with the number, letter, and function keys. But Mashable figured out how to switch apps and initiate a phone call.

There’s a T-Mobile SIM card installed, which explains how the system is connecting to the internet to grab Twitter updates. Theoretically you could also use that SIM card to surf the web, make free calls, or run wild (until T-Mobile or the folks at the CW notice the unusual activity and shut down your internet access).

Mashable reports that at least some parts of the phone appear to have been manufactured by Foxconn, and what we may be looking at is a modified ABO 3G QWERTY phone which sells for $87 (although it’s probably cheaper if you buy it in bulk and don’t need the keyboard or phone casing).

You can check out a teardown video at Mashable.