The CutiePi is a Linux tablet with a built-in handle, a custom user interface, and a Raspberry Pi single-board computer at its heart.

Set to begin shipping in November, the CutiePi is up for pre-order through a Kickstarter crowdfunding campaign. And now that the campaign has surpassed its original $35,000 goal, the developer has started promising “stretch goal” features.

One of those is a new Sidekick mode that lets you use the tablet as a controller when you connect it to an external display. 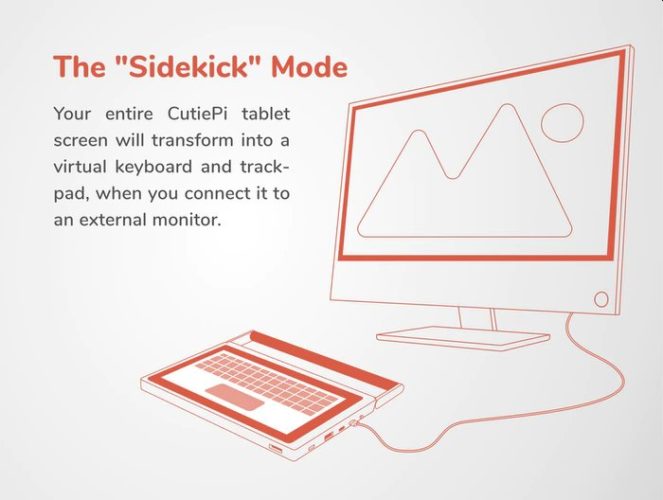 Details for Sidekick mode are a bit light at the moment, but here’s the basic idea: plug the tablet into an external monitor and instead of just mirroring the CutiePi’s 8 inch display on a bigger screen, you’ll be able to use the tablet as a virtual keyboard and touchpad.

Other stretch goals that have already been met include:

The tablet measures 8.4″ x 5.3″ x 0.5″ and weighs about 13 ounces. Inside, it features a Raspberry Pi Compute Module 3+ Lite, which is a tiny computer that looks like a stick of RAM, but which features a 1.2 GHz Broadcomm BCM2837 ARM Cortex-A53 processor and 1GB of RAM.

When the CutiePi hits retail later this year, it’s expected to sell for $229. But during crowdfunding you can reserve one for around $190 and up (there had previously been $169 super early bird specials, but those are now gone).

Design files for the case are also available at GitHub, if you’d rather just 3D print your own. And you can also find source code for the CutiePi shell and other software in the same GitHub repository.