The CutiePi is a Linux tablet with an 8 inch display, a handle, and an open source design — you can find details about the tablet’s software, printed circuit board, and design files for making your own 3D-printed case at github.

First unveiled last summer, the project is still in development. But the team behind the CutiePi says a crowdfunding campaign is coming soon.

In the meantime, they’ve announced some major progress, including version 1.2 of the CutiePi board, the final design for the tablet enclosure, and software updates. They’ve also put together a fully functional prototype. 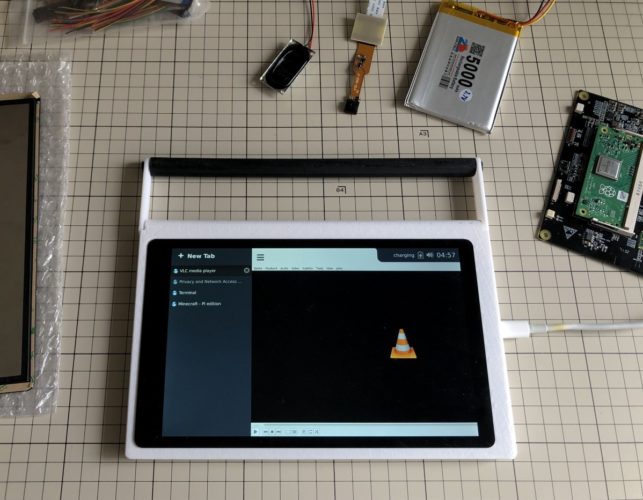 At the heart of the CutiePie is a printed circuit board with a slot for a Raspberry Pi Compute Model 3 Lite, which features a 1.2 GHz Broadcom BCM2837 quad-core ARM Cortex-A53 processor and 1GB of RAM.

The board includes WiFi and Bluetooth, a micro HDMI port, USB-C and USB-A ports, GPIO pins, and gyroscope, among other things. And the case includes cut-outs for those ports, plus a microSD card reader, speaker, and power button.

There’s also a built-in handle which can be used to carry the tablet… but it also works as a kickstand if you want to prop up the tablet.

The CutiePi team has also developed a mobile-friendly user interface that runs on top of the GNU/Linux-based Raspbian operating system. CutiePi Shell includes an on-screen keyboard and finger-friendly web browser, terminal emulator, and other key apps. It also has a lock screen, support for a sleep/wake button, a side-tab function for multitasking, and other tweaks to make Raspbian into a tablet operating system.

Prefer to run desktop apps? CutiePi shell also now supports X11 apps, which means that you should be able to use just about any application that runs on Raspbian/Debian.

Since all of the design files and software are open source, anyone can build or modify their own CutiePi tablet… but since not everyone has access to the resources to manufacture a printed circuit board or 3D print a case, the developers plan to launch a crowdfunding campaign soon.

More details about the campaign should be available in May.