Now that Asus offers a way for users to unlock the bootloader on the Transformer Pad TF300T, developers are starting to create custom ROMs for the 10 inch tablet.

The Asus Tranformer Pad TF300T features an NVIDIA Tegra 3 quad-core processor and an optional keyboard docking station. It’s basically the cheaper version of the Transformer Prime, with a little less battery life, a CPU that’s a little slower, a camera that’s not quite as good, and a price tag that’s $100 lower.

Asus ships the tablet with Android 4.0 Ice Cream Sandwich — but if you’d rather run a custom version of Android, there’s now an experimental build of CyanogenMod 9 for the TF300T. 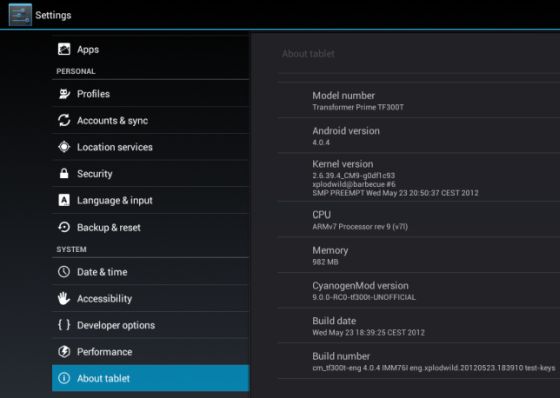 The developers porting CM9 to the tablet say it’s designed to improve performance and offer special features that you don’t get with the standard Android 4.0 environment. But this is still an early build and something aren’t fully functional yet.

For instance, as of build 2 there’s only partial support for transferring files to and from a PC using a USB connection.