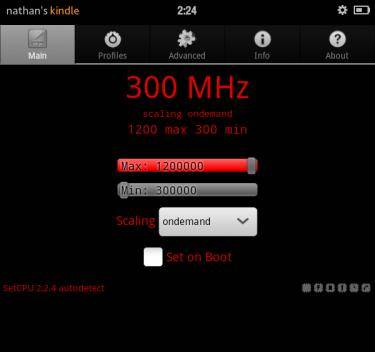 Developers have started to release custom kernels for the Amazon Kindle Fire which allow you to make a few nifty changes to the tablet. For instance, you can overclock the CPU or GPU when using the first custom kernels.

Right now the top clock speed is 1.2 GHz, but it could go even higher. Out of the box the Amazon Kindle Fire has a top speed of 1 GHz, but the TI OMAP4 dual core processor in the Kindle Fire can handle higher speeds.

Developer DooMLoRD says future versions of his custom kernel may add support for speeds up to 1.5 GHz. He may also try underclocking the device to save power and preserve battery life.

Custom kernels for the tablet are still in the early phases. For the first few days WiFi wasn’t working on devices running DooMLoRD ‘s kernel, but it appears the problem may have been resolved in the latest version. There may still be other bugs though.

Developer intersectRaven has also started working on a custom kernel which is available for testing.

In order to flash a custom kernel you need a rooted tablet, a computer with the Android SDK, a bit of experience hacking the Kindle Fire or other Android devices, and the knowledge that things can go horribly wrong if you make a mistake.

At this point you probably shouldn’t install a custom kernel unless you know how to revert to the original kernel — but the process could become safer and easier in the future, making it easier for Kindle Fire owners to overclock their tablets to improve performance (and reduce battery life).

The Amazon Kindle Fire is a 7 inch tablet with a 1024 x 600 pixel display and 8GB of storage. It’s designed to work with Amazon’s book, music, movie, and app stores, but hackers have figured out how to root the tablet, install the Android Market, and even replace Amazon’s software with a custom version of Android.

You can pick up a Kindle Fire from Amazon for $199