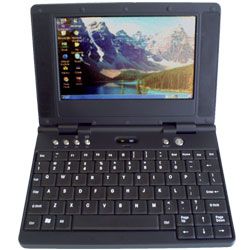 Before there were netbooks running Linux and Windows XP, there were handheld PCs, running EPOC or Windows CE software. They may not have been able to run full fledged desktop applications like Firefox, Office, or OpenOffice.org, but they were good enough to give you some mobile computing power on the go. But for some reason, the handheld PC fell out of fashion a few years ago. Cellphones and laptops took their place, to some degree. But laptops didn’t have the battery life or ease of use of handheld PCs and cellphones didn’t have the large screens and full keyboards.

But the rise of the netbook apparently has some manufacturers taking another look at the idea of handheld PCs running stripped down operating systems like Windows CE.

The latest netbook/handheld PC running Windows CE is the Cuol Book, available in the UK from Robert Dyas. This odd little system has no trackpad or touchscreen to speak of, but comes with a mouse. It has a 7 inch display, measures just 21cm x 15cm, or about 8.3″ x 5.9″ and weighs just 680 grams or about 1.5 pounds.

The Cuol Book runs Windows CE 5.0, which is a bit outdated. But the system includes a web browser, Skype, and some basic Office applications as well as a media player. It has a 533MHz ARM CPU, 1GB of storage, and 512MB of RAM and a 3000mAh battery which should provide 5 hours of operating time.

It also includes 2 USB ports and a mini USB port and a SD/MMC card reader. If you’re looking for a small device with long battery life and a full sized keyboard (and no trackpad), the Cuol Book actually looks kind of cool. But at £159.99, or nearly $300 US, I’m not sure why anyone would really choose this over a cheap netbook like the Asus Eee PC 2G Surf of the Acer Aspire One, both of which can run Windows XP or Linux.