The maker of the Cubieboard line of mini-computers and dev boards have released the most powerful version to date. The Cubieboard4 is a single-board computer with an Allwinner A80 octa-core processor, Gigabit Ethernet, HDMI and VGA ports, and USB 3.0 support.

Cubietech has announced the the Cubieboard4 (also called the CC-A80) is now available for about $125. 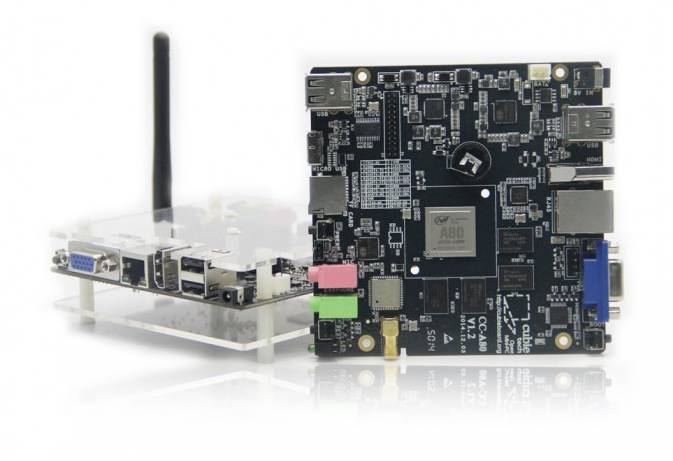 The computer is basically a small form-factor PC board with developer-friendly UART, I2C, and JTAG connectors, up to 2GB of RAM, up to 64GB of eMMC storage, and dual-band WiFi and Bluetooth.

The Cubieboard4 is powered by Allwinner’s octa-core chip which combines four ARM Cortex-A15 processors cores, four lower-power ARM Cortex-A7 cores, and PowerVR G6230 graphics. I was pretty impressed with the overall performance of this chipset when I reviewed the Rikomagic MK80 (which has similar hardware… but in a more consumer-oriented package).

Cubietech says the system will come with Android pre-loaded, but it also supports Ubuntu or Debian Linux for folks that want to use the system as a tiny, low-power desktop computer or server. Hoping to use the Cubieboard4 as a media center? You might be better off running Android for now… the Ubuntu image does include some support for hardware-accelerated graphics and video, but it’s a work in progress.