Chinese tablet maker Cube is getting ready to launch another device running Jide’s Remix OS software. The Cube i10 Remix is a low-cost tablet with a 10.6 inch display, 2GB of RAM, 32GB of storage, and an estimated price of 699 yuan, or about $110.

That makes it one of the most affordable tablets to ship with Remix OS to date, although it still costs more than twice as much as the cheapest Remix device: Jide’s own Remix Mini desktop. 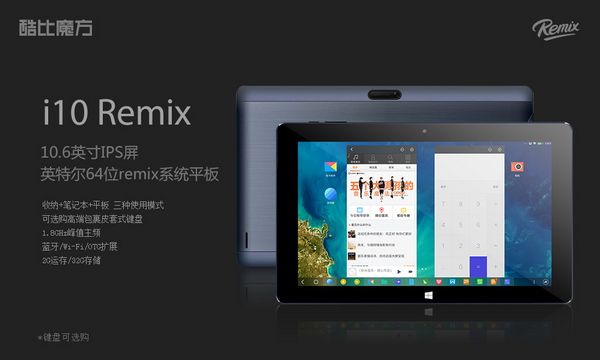 Remix OS is a custom version of Android designed to make Google’s mobile operating system feel more like a desktop OS. The operating system can run any Android app and it supports the Google Play Store, but Remix OS also has a taskbar and support for running Android apps in either full-screen or windowed modes.

While Jide develops the software, the company has also been making Remix OS available to other companies, and the Cube i10 Remix won’t be the first Cube tablet to run the software. Earlier this year Cube launched the Cube i7 Remix tablet with Remix OS.

The new Cube i10 Remix is basically a version of an existing tablet called the Cube i10. But instead of shipping with stock Android software and/or dual-boot Android and Windows software, the new version uses Jide’s custom version of Android.