One of the strangest things I saw at CES 2012 was the MISEETX, a self-contained PC-in-a-box. Basically it’s a little PC with an Intel Atom processor, RAM, and a small LCD display which you can flip up.

But you can also use the built-in projector to shine a virtual 800 x 478 pixel display on a wall or screen. And for the keyboard? You can project that on the tablet or desk in front of you, using another built-in projector.

While CTX Technologies was showing off the MISEETX a year ago and promising it would come to market soon, that hasn’t happened yet. But when I met with the company earlier today to check up on the odd little PC, I was told that it’s still on track… to launch sometime this year. 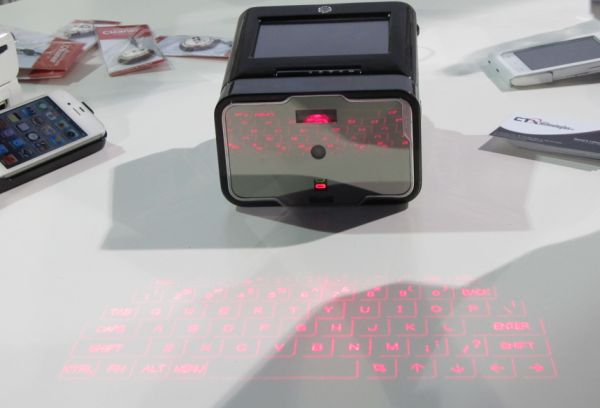 CTX Technologies doesn’t plan to sell the MISEETX under their own brand name. Instead they have a deal with a big name device maker which will sell the computer under its name.

While neither CTX or LG have confirmed anything… that big device maker is probably LG.

By the time the system actually comes to market, it’s possible that it will have a newer version of the Intel Atom processor, maybe a storage bump, and other upgrades.

Last year CTX said the retail price would be around $600 when the computer hits the streets. It’s not clear if that’s still the target price or if that’s also in flux.

It will still probably feature a battery for use in areas where you can’t find a plug, and a range of ports including HDMI and USB ports for hooking up peripherals when a virtual screen and virtual keyboard just won’t cut it.

One other CTX product that is definitely going to ship in the next few months is a tiny keyboard projector that will be available from Brookstone. Companies have been producing this sort of virtual keyboard accessory for years, but the new CTX model is one of the most compact units I’ve seen.