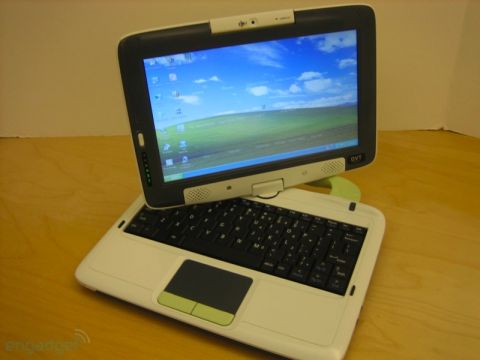 Tired of looking at netbook after netbook with the same specs? Come January, it looks like you’ll be able to pick up something a bit different, courtesy of CTL. Sure, the next version of the CTL 2Go PC will have the same 1.6GHz Intel Atom CPU, 8.9 inch, 1024 x 600 pixel display, and 1GB of RAM that all the cool kids seem to have these days. But it will also have a touchscreen that can be folded over the keyboard for use in tablet mode.

The only other netbook class device with a tablet-style touchscreen right now is the Gigabyte M912 which sells for $699 or more. The CTL 2Go PC, which is based on Intel’s Classmate PC reference design, is expected to run $500 or less.

This won’t be CTL’s first foray into netbook territory. The company already sells netbooks at Amazon

and other retailers based on the current Classmate PC at Amazon. But to be honest, the Classmate PC design is really intended for educational markets, not consumer oriented netbooks. The Classmate is typically a bit bulkier than other netbooks. And while rugged is good, it also makes the Classmate PC look a bit more like a toy than a computer. At a time when there’s no shortage of $300 to $500 computers with similar specs, there hasn’t been much reason for consumers to pick up a CTL 2Go PC instead of a netbook from Acer, Asus, HP, Dell, Lenovo, or MSI.

But to date, very few netbook makers are offering touchscreens, let alone tablet-style netbooks. So if CTL can hit its target date of January, it may have the market practically to itself. And I could see a lot of people opting to pay a few extra bucks for that tablet functionality.

The CTL 2Go PC will have a 60GB HDD, 802.11b/g and n WiFi, and an acceleramoter for automatically adjusting the display when you switch from clamshell to tablet mode and back again. There are more pictures of the upcoming 2Go PC at Engadget. You can also see a video of the netbook in action after the break.