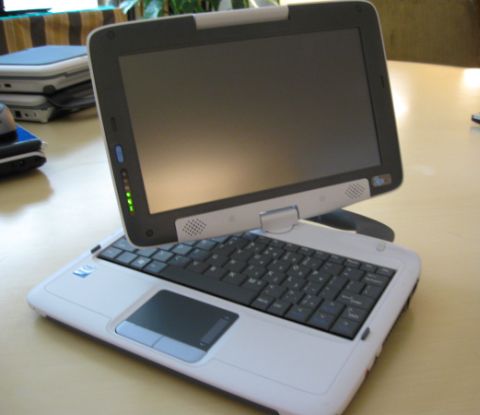 CTL’s new 2Go PC convertible tablet-style netbook has been making the rounds for the last month or two. But now the company’s ready to make the product official. The latest mini-laptop in CTL’s 2Go PC lineup is based on the Intel Classmate 3 reference design. It’s designed for classroom use and has a ruggedized casing, a handle for easy carrying, and a touchscreen and stylus. And unlike the Asus Eee PC T91 and T101, which won’t be available for another few months, the CTL 2Go PC should be available for purchase as soon as this afternoon.

I met with the folks at CTL earlier this week to check out a prototype, and it’s a pretty nice little machine. The 8.9 inch display is nice and crisp, and while the netbook does not run Windows XP Tablet edition, CTL has loaded some handwriting recognition software which does a pretty good job of reading even my bad handwriting. If you prefer, you can also pull up an on screen keyboard and tap away with your finger or a stylus when using the netbook in tablet mode.

CTL has been selling Classmate PC-based netbooks for the past year and a half, but up until now about 90% of the company’s sales have been to educational markets. While the new convertible 2Go PC is designed with the classroom in mind (for instance, CTL plans to offer a bulk battery charger that will let teachers charge as many as 16 batteries at once), I suspect that this model could gain some traction with mainstream consumers. Especially since CTL will be one of the first companies to release a sub-$500 touchscreen tablet.

The computer’s not without its problems though.

The keyboard is fairly small, even for a netbook with an 8.9 inch display. And like earlier Classmate PC-based devices, the shift key on the right side of the keyboard is located awkwardly to the right of the up arrow, something that Asus is moving away from on its netbooks.

The 2Go PC also has an accelerameter which detects when the machine changes position and rotates the display. But I found that it often took a few seconds for the screen to rotate, and sometimes it didn’t rotate at all unless you hold the netbook in an vertical position while you rotate the device.

CTL can accept custom orders for as few as 100 machines, which allows customers to submit their own custom software stacks. Or if you want to order the retail version, it’s available with Windows XP Home, or Windows XP Pro. Eventually CTL will also release a version based on Ubuntu Linux, but the company will likely wait until after Ubuntu 9.04 is released in April. The update will likely include support for touchscreen displays.

Here’s a rundown of the specs for the retail version:

CTL is not phasing out its 2Go PC based on the Classmate 2 reference design just yet. The company will continue offering that model throughout 2009. It has a more ruggedized exterior, no touchscreen display, and costs about $100 less. One other thing that sets the convertible tablet apart from the older CTL 2Go PC is the fact that the handle on the older models is not removeable, while users can take off the handle on the tablet model by removing the battery and undoing two screws.

You should be able to order the netbook from CTL’s web site this weekend, but it will likely have a $549 price tag. It will soon also be available from several major online retailers for around $499.

Here are some photos of the new tablet, as well as some shots comparing the tablet with the older CTL 2Go PC: