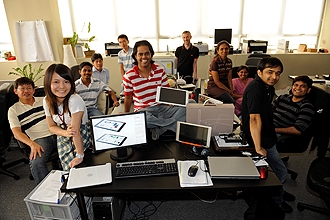 The Singapore Straits Times has spilled the beans on the upcoming CrunchPad touchscreen tablet that’s the brainchild of TechCrunch founder Michael Arrington. The initial idea was to build a touchscreen device that was designed to run a web browser and little else, get excellent battery life, and sell for around $200. So how did they do?

Basically, they’ve wound up building a netbook, albeit one without a keyboard. Here’s the rundown of the specs:

So umm, yeah. It weighs about as much as a typical netbook, has the same processor as most netbooks, and it will likely cost about the same as most netbooks, if not more than some. It’ll have a larger display than most, which could be a plus for some, but it also has no keyboard, which will make text entry much more difficult. But if you’re primarily looking for a tool for reading web sites and viewing online video and don’t care about typing out emails and other text, then I suppose it could do the trick.

The problem is, more and more of our online activity requires 2-way communication. Maybe one day a microphone and speech recognition software will replace the keyboard, (although that could make libraries, coffee shops, and classrooms much noisier places), but for now if you want to write emails, update your blog, leave comments on news articles, or chat with your friends, you’re going to want a device with a keyboard.

If the CrunchPad were a $200 web video player, maybe I could get behind it. But for $400, it’s basically a netbook without a keyboard. And I’m not sure I see the point.

Incidentally, I’d take the Straits Times article with a grain of salt, since the article also refers to the CrunchPad as the “world’s first tablet PC,” which is kind of, you know, absolutely, 100% wrong.