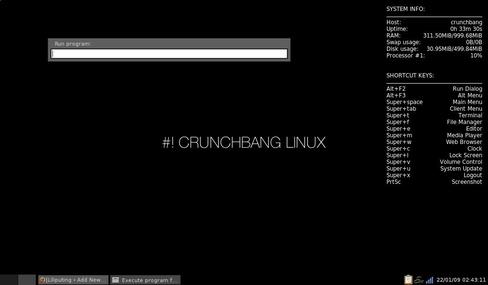 CrunchBang Linux is a light weeight Linux distribution based on Ubuntu. It uses the light weight OpenBox window manager, which doesn’t use a ton of system resources, and which also doesn’t use up much screen real estate, making CrunchBang a decent choice for netbooks. And now there’s also a version specifically designed for the Eee PC, called CrunchEee.

The OS comes preloaded with Firefox, VLC, and not much else. If you want OpenOffice.org, or even lighter weight office apps like Abiword and Gnumeric, you’ll have to install them yourself. But this means that CrunchEee is very light on your hard drive, SSD, RAM, and other system resources.

The Eee PC version of CrunchBang also includes support for most Eee PC hardware, so you shouldn’t have any problems with your touchpad, dispplay, or wireless card. The Eee PC Fn key combinations for adjusting the screen brightness also work, although I didn’t have much luck controlling the volume on my Eee PC with the Fn keys.

Like most Ubuntu-based distributions, you can try CrunchEee without installing it by downloading the disc image and either booting from a USB CD drive or creating a bootable flash drive using Unetbootin.

16 replies on “CrunchEee: CrunchBang Linux for the Eee PC”