It’s the end of an era, lightweight Linux fans. Philip Newborough has decided that it’s time to move on, and he’s ceasing development of #! — CrunchBang, for the uninitiated. 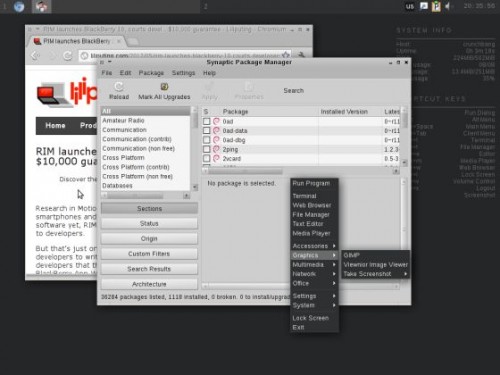 Years ago when Brad and I started working together at AOL’s Download Squad, I purchased an MSI Wind U100. I threw all kinds of operating systems at it, from (shudder) Vista to an unpolished Windows 7 and OS X to endless Linux distros. No operating system lasted long on my little Atom-powered netbook, but one that I kept coming back to was CrunchBang.

Why? It was incredibly compact and efficient, and it booted in a flash. It didn’t come with scores of apps I’d never get around to using like some distros, but everything that I needed on a day-to-day basis was there from the very start.

But a lot has changed since Newborough first started working on the distro. He feels as though CrunchBang “no longer holds any value,” and that keeping the project going for purely sentimental reasons wouldn’t benefit the #! userbase. Instead, he’s suggesting plain vanilla Debian as a worthy alternative.

While he won’t be working on CrunchBang any more, Newborough has promised to keep the user forums up and running. “Ultimately, they belong to the community and so it will be for the community to decide what happens to them,” he wrote, adding that he’ll proudly support them as long as required.

It’s tough to hear that Newborough is letting CrunchBang go, but that’s how things go in the Linux community. Beloved distributions come and go. Sometimes someone else takes the reigns, and sometimes you’re left waiting for a worthy successor to come along. Debian’s certainly a great OS, but there are plenty of Lightweight Linux fans out there wondering what’s next for CrunchBang.

Whatever happens, Philip Newborough’s years of hard work won’t be forgotten. Best of luck on your next great adventure, Philip!