This time they’ve developed a kit that looks more like a traditional laptop computer. But under the hood it’s designed to be powered by a Raspberry Pi single-board computer. And the keyboard can be removed from the base to reveal a set of sensors, pins, buttons, lights, LCD displays, a joystick and other components that can be used for educational projects.

The developers have launched a Kickstarter crowdfunding campaign for the CrowPi 2, and plan to ship units in August 2020. Super Early Bird prices for CrowPi 2 kits start at about $140. 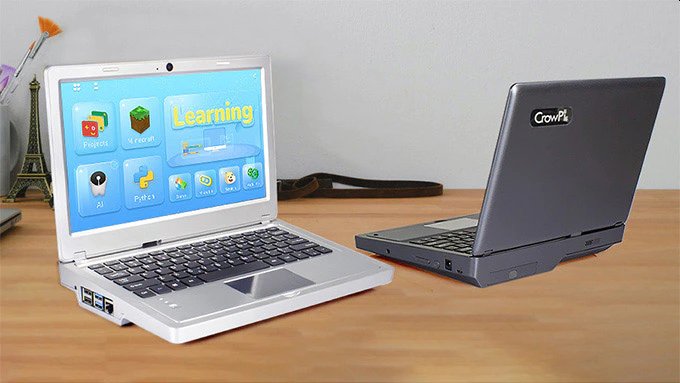 That starting price doesn’t include the cost of a Raspberry Pi computer. But if you don’t already have one you can pay a bit more to get a model that comes with the single-board computer.

What you do get for the base price is a CrowPi2 kit featuring an 11.6 inch, 1920 x 1080 pixel IPS display, a 2MP camera, stereo speakers, and a microphone as well as the detachable wireless keyboard, a power bank, power supply, and other components including an IR receiver and remote controller, motors, servos, NFC cards, game controllers, and even a screwdriver to assemble everything.

The system also comes with two microSD cards — one is loaded with custom software featuring educational applications, and the other comes with RetroPie game emulation software. Swapping out microSD cards lets you quickly transition between education and gaming experiences.

With support for Raspberry Pi 3 or Raspberry Pi 4 hardware, it’s also capable of running a variety of other operating systems including Raspbian, Ubuntu, Arch, and FreeBSD.

The CrowPi2 measures 11.4″ x 7.5″ x 1.8″ and weighs about 2.9 pounds. It may not be the most powerful or the most compact 11.6 inch laptop. But it looks like a pretty nifty option for kids (or adults) interested in learning more about computers and electronics.