Crouton is a script that lets you run Ubuntu or Debian on a Chromebook without uninstalling Chrome OS. Developed by David Schneider, the tool has been around for a few years, offering an easy way to run native desktop Linux apps such as GIMP, LibreOffice, and even Firefox on Chrome OS laptops and desktops.

But up until recently you’ve had to flip back and forth between Chrome OS and Ubuntu desktop environments… now there’s an option to simply run Ubuntu in a browser tab. 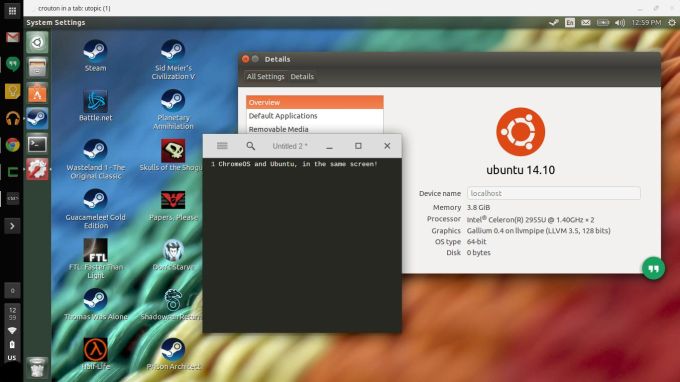 This lets you switch between Chrome OS and Ubuntu simply by changing browser tabs. you can even resize the window so you can run Ubuntu apps in one browser tab while surfing the web in another.

All you need is a Chrome OS device that’s been set to developer mode (it doesn’t matter if you’re using the stable, beta, or dev channel of Chrome itself, you just need to be in developer mode).

Then you can follow the instructions for installing Ubuntu with Crouton (which basically consists of downloading a script, opening a terminal window, and typing a single command). Note that if you want to be able to run Ubuntu in a browser tab, you’ll need to add “xiwi” to your list of targets.

You can read more about “Crouton in a tab” at the github page for the project. Work on this feature has been underway since October, but it’s only recently been added to the main branch of Crouton.

24 replies on “Crouton for Chromebooks: Run Ubuntu in a browser tab”