The first Chromebooks were designed to run web apps only. But a few years back Google added support for running Android apps, and then Linux apps.

Now you can also run Windows applications on a Chromebook… although it requires installing a third-party tool that sells for $40 and up.

CodeWeavers has announced that CrossOver 20 for Chrome OS is now out of beta, allowing you to install and run many Windows applications on most recent Chromebooks with Intel processors. 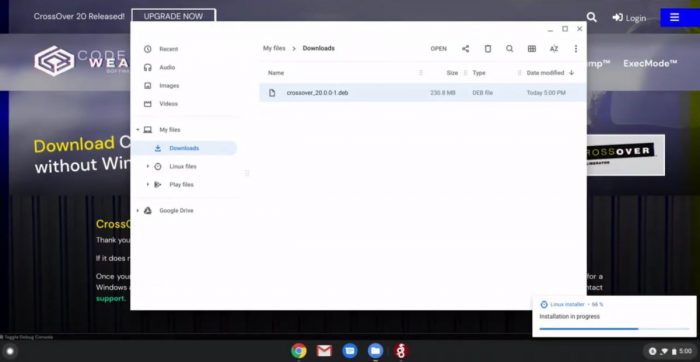 CrossOver has been available for Linux and Mac computers for years, allowing users to run supported Windows applications on those platforms. CodeWeavers released an early version of CrossOver for Chrome OS in 2016, but it was a new build based on Android that was still pretty rough around the edges. It’s been in beta ever since.

After Google added support for running Linux software on Chromebooks, CodeWeavers shifted gears and made sure its existing Linux software was compatible with Google’s “Crostini” tool, which is a Linux subsystem that runs within Chrome OS.

CodeWeavers says that things work well enough now that the company felt comfortable removing the beta label, and you can now buy a stable version of CrossOver for Chrome OS for:

Before pulling out your wallet though, you should probably make sure that your Chromebook is supported. You’ll need:

Keep in mind that not all Windows applications are compatible with CrossOver, but you can browser the CodeWeavers compatibility database or search by name for the software you’re hoping to run to see if it’s supported.