CrossOver is a software tool that lets you run some Windows applications on non-Windows operating systems, including GNU/Linux and macOS. Last year the developers behind CrossOver launched the first technical preview for Android and Chrome OS.

Now CrossOver on Chrome OS Beta is available from the Google Play Store for anyone who wants to try it.

And by anyone, I mean anyone with a device featuring an x86 processor and running Android 5.x or later. For the most part that means you’ll probably need a recent Chromebook… although not all Chromebooks are supported, since some recent models have ARM-based processors. 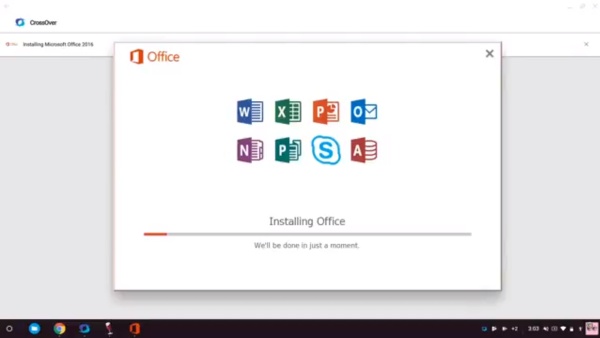 In order to use Crossover on a Chromebook you’ll need to enable the Google Play Store and then download the app from the Play Store.

Once that’s done, you can search Crossover for known compatible apps and install them from within the application itself. It may also be possible to install unlisted applications by downloading and running their installer files within Crossover, but if it requires additional dependencies it may not work unless you can also install those other programs.

CrossOver on Chrome OS is said to have a database of 13,000 compatible programs including Microsoft Office, Quicken, and Steam. You’ll still need to pay for a license or login with your existing account if you want to use paid software like Office or Quicken though.

CodeWeavers usually charges for CrossOver software, but since the Chrome OS/Android version is a public beta, CodeWeavers is providing users with a free 1-year trial, and support is also included for free.

If you wait a little while, there may be another option: the developers of the free and open source Wine project are planning to launch Wine 3.0 soon, and one new feature is initial support for Android devices.

That feature builds on the work CodeWeavers did to bring CrossOver to Android — the CrossOver and Wine projects work closely with one another. A key difference is that CodeWeaver is a for-profit company, so CrossOver often gets new features (and app compatibility) before Wine does, and CodeWeavers also offers official support for its windows emulation software.