CrossOver Android is a utility that makes it possible to run some Windows software on Android devices with Intel processors. The developers at CodeWeavers released an initial beta last summer, and a new Tech Preview is coming soon.

CodeWeavers president James Ramey says the update includes a new user interface and support for more apps and games. One key change? The new software makes it possible to run Microsoft Office 2013 on some Chromebooks.

Update: The new preview is available. You can sign up to join the beta program in order to download CrossOver Android from the Play Store 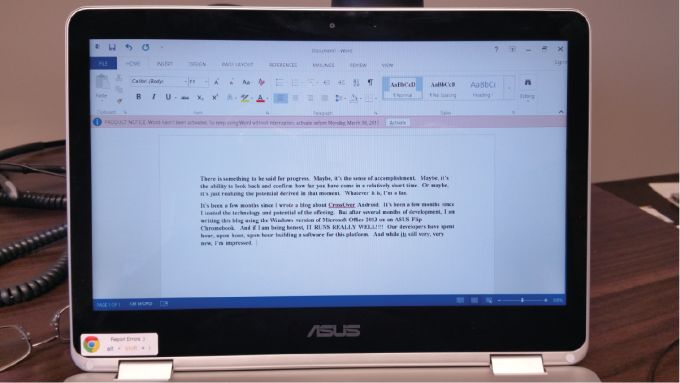 There are a few caveats: you need a Chromebook with an Intel processor and support for running Android apps. But if you have a device that meets those requirements, you should be able to use CrossOver Android to install a fairly recent version Microsoft’s office suite… which gives Chromebook haters one less reason to complain that they’re not “real” laptops.

CrossOver Android is developed by the same company that’s been making Windows emulation software for Linux and Mac computers for ages, and a few months ago CodeWeavers added support for Office 2013 to those versions of its software.

CodeWeavers is also a major contributor to the open source WINE project, and many, (but not all) features which first show up in CrossOver eventually make their way to WINE. So don’t be surprised if there’s eventually a free and open source alternative to CrossOver Android. But WINE doesn’t include commercial support, one-click installs, or some other features that are available from CrossOver.

5 replies on “CrossOver is bringing Office 2013 support to Chromebooks”