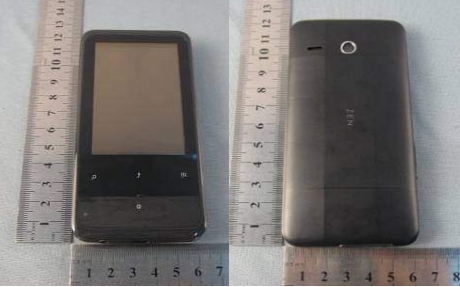 It wasn’t that long ago that US residents looking for an Android-powered alternative to the Apple iPod touch didn’t have a lot of choices. OK, to be honest, you still don’t. While you can pick up an Archos 28 or Archos 32 handheld device running Android 2.2, you won’t find many other portable media players running Android yet. But that could all change soon. A few days ago we got word that the Samsung Galaxy Player would be coming to America. Now it looks like the Creative Zen Touch 2 is on the way as well.

The Zen Touch 2 passed through the FCC this week, which is one of the first steps any device with wireless capabilities has to take before it can be sold in the US.

There’s no word on US pricing or a release date yet. I also wouldn’t expect the Zen Touch 2 to support the Google Android Market out of the box, which makes it a bit of a tough sell when compared to the iPod touch which can download almost any iPhone/iPod app available from the App Store. But for the right price, the Zen Touch 2 could be an attractive alternative for customers who are looking for a handheld device for media consumption, web surfing, GPS navigation, and other features but don’t want to use an iPod touch or iTunes.

Now if only someone would release a portable media player running webOS or Windows Phone 7.