A few years ago, a computer enthusiast created a battle card game that features CPUs instead of Orcs and goblins. The idea is, maybe not all card games need to be based in fantasy. Put four tech geeks in a room together and ask them what their favorite microprocessor is and a battle is sure to ensue. 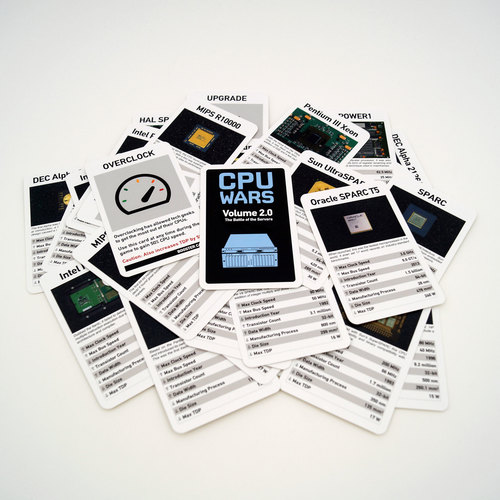 The original deck includes 30 cards featuring CPUs from Intel, Motorola, IBM, and more, the most impactful microprocessors that have come out over the past 40 years.

Version 2.0 includes 30 new cards featuring server CPUs from the past 30 years, plus four booster cards to add an element of strategy. Boosters allow players to enhance the server CPUs they have in their hand with power-ups.

Although a stand-along game, CPU Wars 2.0 is also an expansion to Version 1.0. You can combine both packs to create a 60-card deck and play with up to six people (the 30-card deck supports two to three players).