I don’t think it’s any surprise that Apple and Samsung dominate the smartphone market these days. But a recent report from Counterpoint Research confirms that fact — and offers a few interesting details that I hadn’t necessarily expected.

The report examines the top 10 smartphone models sold in 2019. 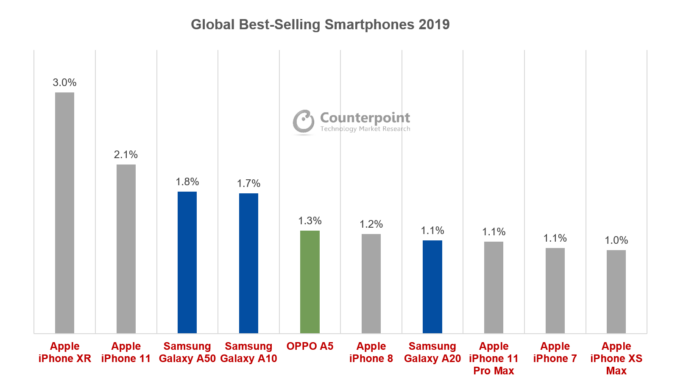 First up, only one of those phones came from a company other than Apple or Samsung (it was Chinese company Oppo).

Second, Apple claimed 6 of the 10 spots, despite the fact that the company has a relatively limited selection of phone models compared with rivals like Samsung.

And third… Samsung’s Galaxy S and Galaxy Note phones didn’t make the list at all, despite the fact that they’re the company’s flagship-class phones that tend to grab the most attention from journalists (which is probably correlated with the amount of money Samsung spends advertising and promoting those high-priced devices).

Instead, Samsung’s top-selling phones were members of the mid-range Galaxy A series, including the Galaxy A10, A20, and A50. These phones tend to have a mix of premium and mid-range features, which means you get things like OLED displays, fingerprint sensors, and two or more cameras… but they may lake some of the design elements of their higher-priced siblings.

So I suppose it shouldn’t actually be surprising that Galaxy A phones sell better than Galaxy S or Note models. They probably represent a better value proposition for many customers. It’s only surprising because I spend too much time on the internet reading tech blogs and press releases.

From that standpoint, it also probably shouldn’t be a surprise that while the iPhone 11 and iPhone 11 Pro Max made the list, they were both outsold by the iPhone XR and older models including the iPhone 7 and 8… probably because they’re cheaper.

Meanwhile, some companies that didn’t make the list are still selling a lot of units. Counterpoint notes that Huawei is the “second-largest player in the global smartphone sales” market, but that’s because the company sells a large quantity of a bunch of different phone models. No one phone model from Huawei is in the top 10 list for 2019.

Another fun fact: the figures above all relate to global sales. If you look at the North American market, Apple had the top 5 spots. In Europe, things were mixed a bit more between Apple and Samsung. And in China, Apple and Samsung didn’t even make the top 5 list, which was dominated by Oppo, Vivo, and Huawei. 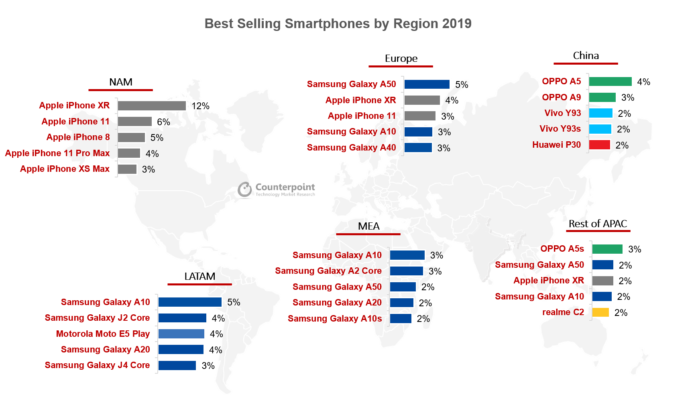 6 replies on “Counterpoint: Top smartphones of 2019 were nearly all Apple and Samsung devices”