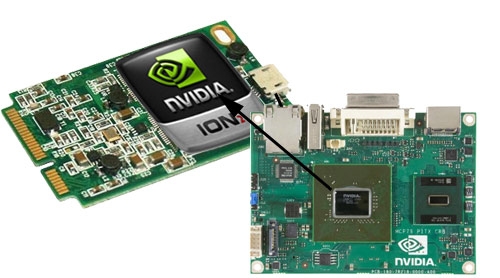 Theres a rumor going around that NVIDIA’s next-generation ION platform could be available on a PCI Express card. French netbook blogger Pierre Lecourt reports that while he hasn’t seen any confirmation, he’s heard from several sources that NVIDIA will be taking a PCIe approach for the ION chipset in the future.

And I have to say, this rumor makes sense. Right now, here’s the recipe for building the ION chipset: Take an Intel Atom processor, disregard the integrated GMA 950 graphics that Intel usually bundles with the chip and replace it with NVIDIA GeForce 9400M graphics. But Intel’s next-gen Atom processors don’t include a separate graphics chipset. Intel Atom Pine Trail chips will bundle the CPU, graphics, and memory controller functions all onto a single chip.

In other words, creating a standalone video card that can easily be slotted into a netbook might be the smartest way for NVIDIA to go. As an added bonus, it could mean that devices with ION 2 graphics might have switchable graphics, meaning you could use the Intel graphics for day to day computing tasks and turn on the NVIDIA GPU when you want to watch HD video or play a game.

We’ve also heard that NVIDIA plans to make the next generation ION platform compatible with non-Intel chips. A PCIe solution would certainly make it just as easy to throw an ION graphics card into a PC with a VIA Nano processor as an Intel Atom based system.

While I’m guessing that NVIDIA’s primary customers for any such PCIe graphics card would be computer system builders, the move would also open up the possibility of NVIDIA selling ION graphics as a third-party add-on. A fair number of netbooks and mini-laptops ship with an open PCIe slot which may be intended for use with a 3G modem or other module. If you happen to have one of those systems, it would be relatively simple to open up your laptop and insert an ION PCIe card. On the other hand, because that would be an internal-only modification, you wouldn’t get an HDMI port that way.

Of course, this all just a rumor for now. But we should know more early next year.

11 replies on “Could NVIDIA offer ION 2 as a netbook upgrade on a PCIe card?”