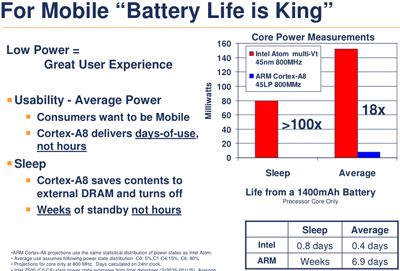 First of all, let’s make something clear. Apple has not said that it will make a netbook, and any mini-laptop the company does release will probably look very different from the Asus Eee PCs and MSI Winds of the world. Because Apple doesn’t do cheap. I think it’s more likely that Apple would release an oversized iPod for $599  than that the company will release a cheap and undersized MacBook for that price.

Now, with that out of the way, Computer World has an interesting article discussing what type of CPU an Apple tablet or mini-laptop could use. The verdict? ARM isn’t out of the running. We already know that ARM is working on chips that combine low power with decent performance. And when I say low power, I mean as little as 1/10th the power consumed by an Intel Atom processor, while providing comparable performance.

Computer World speculates that Apple could choose ARM because the chips are cheaper, lower powered, and more customizable than Intel processor. There’s also a picture of an Apple product that looks a bit like a MacBook Air on an ARM product roadmap, but it’s not at all clear that this actually means anything. ARM may just be saying that their chips could be used in computers from manufacturers like Apple.

What do you think? If Apple were to develop a low cost tablet or netbook, would you want to see it run an ARM processor? Intel? Something else altogether?

11 replies on “Could apple be working on an ARM-powered netbook?”