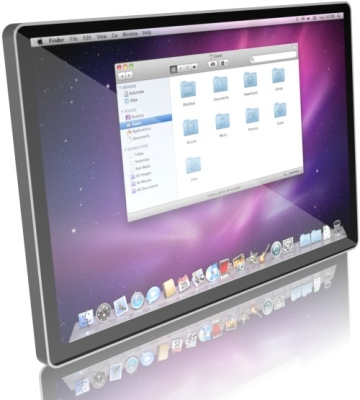 Sure, the Apple iPad turned out to be a 10 inch tablet with a speedy new ARM-based processor and basically the same operating system as the iPhone and iPod touch (with a few tweaks to take advantage of the larger screen). But during the last few years a ton of rumors had leaked about a different kind of Apple tablet. You know, one that ran a full version of OS X and could handle software that wasn’t designed to run on a smartphone or portable media player.

Sure, the more we learn about the iPad, and the more people use it, the more it becomes clear that Apple’s vision for tablets its different from its vision for laptop and desktop computers. OS X is designed for keyboard and mouse input, and the iPhone and iPad are designed for touch input. When you look at things that way, it becomes clear that a tablet running OS X software which was never really designed for finger input might just be a bad idea. But that hasn’t stopped people from hacking their own OS X tablets over the years.

Now an Illinois Pennsylvania-based company called Axon Logic plans to introduced a $500 tablet that runs OS X. What’s more, it will reportedly have a faster processor and more connectivity options than the iPad — despite the fact that it will carry the same low price tag as the iPad. How does a Core 2 Duo processor, 3 USB ports and a webcam sound? A little too good to be true? It probably is.

Apple hasn’t been too kind to companies that preload OS X on non-Apple hardware before shipping it. Axon Logic’s idea is to ship an OS X Snow Leopard DIY Kit so you can install the OS yourself — but I’d be surprised if that prevents the company from getting sued into oblivion.

CrunchGear reports that the Axon Logic tablet could be available within the next few months. But I wouldn’t hold my breath waiting for it.

12 replies on “Could a $500 hackintosh tablet be the iPad you thought you wanted?”