Microsoft’s Cortana voice assistant is built into every PC that ships with Windows 10. You can interact with Cortana by voice or by typing a question or request. And it does many of the same things other voice assistants including setting reminders, providing news or weather updates, or telling jokes. There’s also support for third-party “skills” from companies including Fitbit, TuneIn, and Expedia.

But one area where Amazon, Google, and Apple still hold a lead is in smart home gadgets. Want to control your locks, light bulbs, thermostats or security cameras by voice? Alexa, Google Assistant, and Siri have got you covered with support for a wide range of smart home ecosystems.

Now Microsoft is starting to play catch up: there’s a new Connected Home tab in Cortana for Windows 10 PCs and phones. 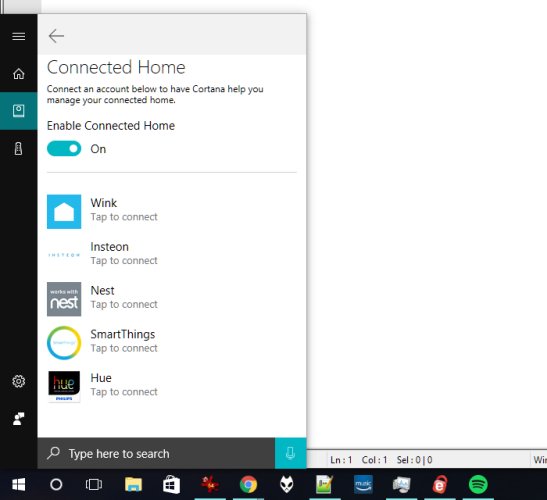 At launch, you can link Cortana to devices from Wink, Nest, SmartThings, Hue, and Insteon.

The timing is interesting. While Cortana initially launched on Windows phones and computers, the first smart speaker to use Microsoft’s voice assistant software is coming soon and the Harman Kardon Invoke speaker will probably also be able to control your smart home devices.

But it’s nice to know that you don’t necessarily need new hardware to do that. You just need a PC that’s on all the time.

6 replies on “Cortana learns to speak to smart home devices”